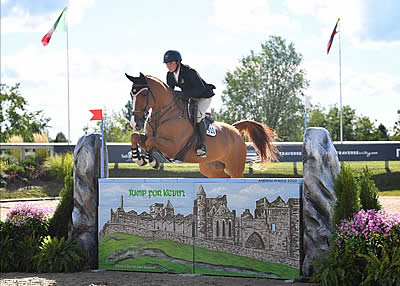 September 7, 2020 — For one memorable evening at the Silver Oak Jumper Tournament in Traverse City, MI (USA), a tremendous group of supporters rallied to honor international show jumper Kevin Babington (IRL) with the Kevin Babington Benefit Classic. The charitable competition, in which the entirety of the $5,000 purse was donated to the Kevin Babington Family Trust, resulted in a meaningful win for fellow Irishman Patrick McNamara and Billy Onslow.

Babington, an Olympic veteran and team gold medalist from the 2001 European Championships, suffered a life-altering injury at the 2019 Hampton Classic. More than $1 million has been raised in the year since to support Babington and his family with the high costs associated with his ongoing rehabilitation. Jeff Papows, Founder of the Silver Oak Jumper Tournament, has been a key contributor, setting up the “I Ride for Kevin” program, in which exhibitors can donate a percentage of their prize money to the cause at various competitions around the country.

“Because Kevin is so beloved [in the industry], every time I’ve raised my hand to do anything in his name, people sort of rush to help,” Papows said. “We wanted to do this, not just for the continued sort-of-financial reasons, but [also because] Kevin is still very invested in the sport, as is the whole family. That was the point of the class. Kevin taped an introduction for the class, and I think it’s a little bit of a morale boost for Kevin while he’s working so hard with his recovery.”

“It was important for us to show everyone that we’re here, and we appreciate [all the support],” Dianna said.

Ultimately, McNamara and Phoebe Backman’s Billy Onslow came away with a most memorable win. Jumping halfway through the class, McNamara and the 14-year-old chestnut gelding took nearly two seconds off the leading time and held on through the remainder of the competition.

“It was great to be involved in such a great cause for Kevin,” McNamara said. “I’m so happy that this class was in aid of him. Thankfully enough, it worked out [for me] — the plan and everything — [and] it was an Irish win!”