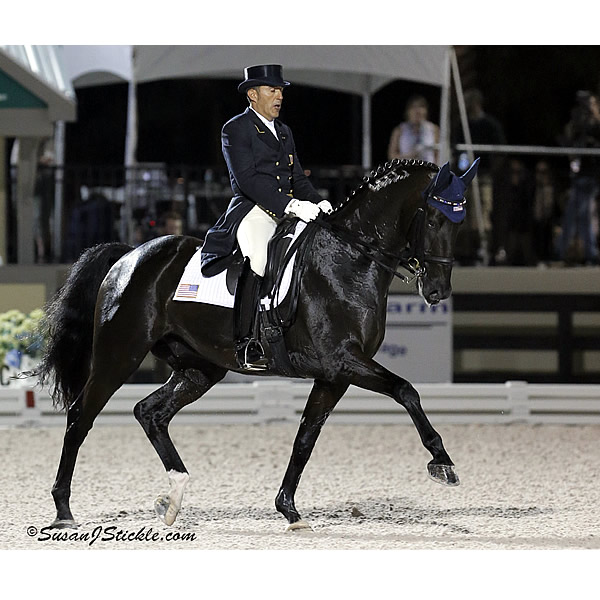 Dr. Cesar Parra and Van the Man during the Nations Cup CDI 3*. (Photo courtesy of SusanJStickle.com)

Wellington, FL (April 18, 2013) – Dr. Cesar Parra, whose bridles have been known to sport red, white and blue brow bands, had patriotism riding high over the April 13-14 weekend during America’s only event of its kind, the Wellington Nations Cup CDIO/CDI3*, presented by Stillpoint Farm at The Stadium at the Global Dressage Festival show grounds.  On Saturday, Parra clinched the FEI Grand Prix Freestyle CDIO3* with a 74.375% score on Van The Man from judges Evi Eisenhardt (E), Maribel Alonso (H), Anne Gribbons (C), Linda Zang (M), and Joan Macartney (B).

The former Colombian 2004 Olympic as well as 2002 and 2006 World Equestrian Games veteran, who became an American citizen in 2008 and represented the US on the Gold medal-winning 2011 Pan American Games dressage squad, was also a member of Friday evening’s Nations Cup reserve champion Team USA 2.

On the combined strength of their Grand Prix Freestyle and Sunday’s FEI Grand Prix Special (72.208%) scores,put Parra in runner-up position in the Individual Rider Standings and top USA Individual rider. Van The Man is an 11-year-old Dutch Warmblood gelding (Obelisk x Landjoker) acquired for Parra by sponsors Sarah and Michael Davis in 2011.

“I was very excited to take part in my first Nations Cup and to medal as a team and as an individual,” said Parra. “I’ve been grateful for the opportunity to represent my country. I’d like to thank my owners, wife, groom, and Katie Riley, my eyes on the ground, and also to the USEF for selecting me as a member of the team. This horse has improved so much. I love him.”

“I am so proud of my husband, so proud of all the Piaffe Performance riders, and all the members of our team. It has been an amazing weekend and season,” said Parra’s wife, Marcela Ortiz.

Tuny Page of Stillpoint Farm praised the Nations Cup format and its contributions:  “One crucial thing about this competition involves the opportunity to expose small tour horses to this kind of atmosphere and a patrons’ tent. That’s really important in the development of international sport. I hope that people in the world of dressage are paying attention to what’s happening here because it’s fantastic and will continue to improve.”

As stylish outside the ring as within it, Parra thanked Page and the pillars of the dressage world that made a week-long dressage event like this possible in Florida:  “Thank you so much [to Page].  She’s not only a great rider with wonderful horses, but she’s always trying to help the sport.  It means a lot to all of us to have this place and I hope we can continue to enjoy it because it’s really a pleasure to come and ride here.  We are so grateful.”

Parra reserved his best praise for last, for his four-legged partner, Van The Man.  “He was right on it, from the very first step.  He’s been, as most of my colleagues know, a ‘clown’ to say the least!  He’s humbled me more than a couple of times, so I just keep on working and today, he said ‘Okay, I’ll do it.’  It was amazing from that first step.  It’s exciting to do the best you can and have it work out.  I’m just so happy that I cannot describe it.  I’m really, really grateful.”

As the Piaffe Performance team leaves Florida for its Whitehouse Station, NJ, facility, all eyes are on the horizon line for Normandy and the 2014 Alltech FEI World Equestrian Games.

“My goal,” Parra concluded, “is to really make him my partner.  I believe in him.  I think he’s a world-class horse.  It’s just a matter of getting him to trust me, to follow me, to believe, to become a great horse.”

Follow Van The Man and Cesar Parra’s season together, and learn more about Piaffe Performance and its stellar stable of dressage prospects at www.piaffe-performance.com.