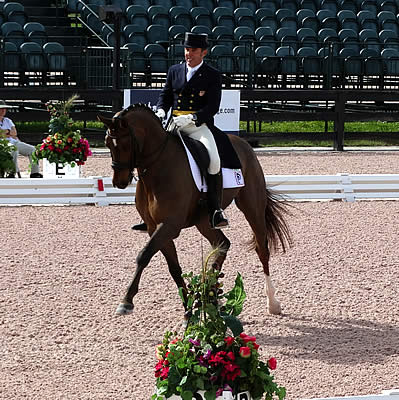 Cesar Parra and Blickpunkt 4 Cavallias placed fourth in the nation at the 2015 USEF Festival of Champions (Photo courtesy of JRPR).

Wellington, FL (December 18, 2015) – Before settling in the U.S., dressage rider Dr. Cesar Parra was a multi-time Colombian National Dressage Champion, and – since winning his first U.S. National title at the 2010 Festival of Champions – has qualified for every U.S. Dressage Festival of Champions, competing six times on four different horses, with an additional four horses in the Young Horse Championships.

Parra’s impeccable horsemanship again rose to the occasion at this year’s USEF Festival of Champions presented by The Dutta Corp., on December 9-12 at the Adequan Global Dressage Festival show grounds in Wellington, Florida. Competing Blickpunkt 4 in the Intermediaire I Dressage National Championship division for owners Eduardo, Gabrielle, and Rory Fischer of Cavallias, Parra took the chestnut to a closely-contended fourth place overall in the nation (just two points out of top seed) as well as third nationally in the Intermediaire I Freestyle, where he received scores as high as a 73.625 percent in front of 4* and 5* judges Umbach (LUX), Holler (GER), Rockwell (USA), Zang (USA), and Matthiesen (DEN).

Pan American Games Dressage Gold medalist Parra said, “Blickpunkt is a high-quality horse that is really starting to come into his own. He has super gaits and conformation for the sport, and is really an eye-catcher. I’m very happy with how he is coming along and has gained confidence in the ring. For us, the Festival was full of personal achievements. When I began showing Blickpunkt at the beginning of this year, he was really anxious in the show ring. To have him go in confidently and do his job is a huge victory!

“He has a lot of talent for piaffe and passage so we’re working toward Grand Prix,” Parra added. “We will stay Small Tour for now. He is schooling Grand Prix movements at home, but I really want to keep his confidence and have consistent clean tests in the Small Tour before he moves up.”

As for Parra, it’s time to move into competition season mode at the 2016 Adequan Global Dressage Festival in Wellington.

“It’s hard to believe that we are back in Florida,” said Parra, who travels with his team from Piaffe Performance from his New Jersey base to his Florida base every winter. “Every year brings new excitement, with new horses starting at new levels. I am especially excited for Fashion Designer OLD (Faustinus x DeNiro) to start showing. He has made a huge jump forward in his training in the last few months, so it should be a lot of fun with him. Also we have a few new horses that should also make a splash,” Parra stated.