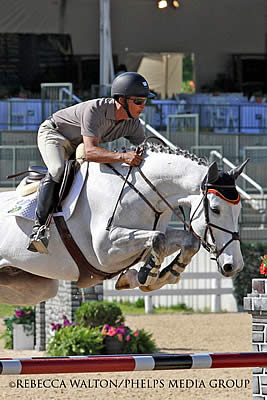 Lexington, KY – May 7, 2014 – Venezuela’s Pablo Barrios has been making the trip to the Kentucky Horse Park each spring for many years, and 2014 is no exception for the talented rider who continued to dominate the leader board. Barrios kicked off the Kentucky Spring Horse Shows with wins in the 1.40m Open Jumpers, as well as the 1.45m Open Jumpers with Ambosell and Lascana, respectively.

Ambosell is very familiar with the Rolex Stadium, having earned top ribbons during both the Kentucky Spring Horse Shows and the Kentucky Summer Series in 2013. The 9-year-old gained experience at Spruce Meadows, the Winter Equestrian Festival and The Ridge at Wellington Turf Tour over the last year, and was ready to showcase his skills in today’s 1.40m Open Jumper class.

Barrios quickly navigated the speed course designed by Richard Jeffery of Bournemouth, England, which featured two double combinations and an open water. Seven entries traversed the track without error, but as the last pair to enter the ring, Barrios and Ambosell galloped into the lead with a clear time of 69.543 seconds, two seconds ahead of leaders David Beisel and Ammeretto, owned by Equine Holdings LLC of Traverse City, MI. Fellow Venezuelan rider Emanuel Andrade and AD Vangelys, owned by Hollow Creek Farm of Aiken, SC, scored the third place honors with a clear time of 72.975 seconds, and pathfinders Nick Novak of Poplar Gove, IL, and YB Blue took home the fourth place award with a clear round in 73.255 seconds.

“This is his first class after WEF, but I just tried to go for it,” explained Barrios. “I left a stride out in the first two lines. I had a long distance to the open water, and he jumped it great. We just had a really big gallop, and he really covered the ground.”

Barrios continued, “After I took Ambosell to Spruce Meadows he improved a lot. Then I gave him a break because he was only 8 years old, but we did a few small classes at The Ridge. He jumped really good on the grass. We did the last week of WEF, and I was very happy with him.”

The 2014 World Equestrian Games (WEG) in Normandy, France are just around the corner. Barrios has already qualified his second mount Zara Leandra for the competition, but he also hopes to qualify Ambosell, and is aiming her towards the Nations Cup at Spruce Meadows. He is also very excited about his greener mounts Lascana and Antares, and he thinks Antares could do very well at WEG.

“I am not sure if he will be ready, but at Calgary he can grow a lot and be ready,” said Barrios. “He is green, but he has a lot of scope. I would like to take him to the WEG.”

It was the 9-year-old mare Lascana who took top billing over Antares today though in the 1.45m Open Jumpers. “I put my best horses in the 1.40m to save them for the Hagyard Classic and the Grand Prix,” noted Barrios. “I put the younger ones in the 1.45m to give them mileage over the big fences, and they jumped really nicely.”

Barrios and Lascana had the quickest clear round to beat Schuyler Riley and Andretti, owned by Southbeach Stables of Wellington, FL, who finished second, and third place competitor Aaron Vale with Pleasure De Riverland, owned by Taylor Sutton of Austin, TX.

“This is a new mount for me that we got in the middle of WEF,” commented Barrios. “She’s very green and a little spooky, but she jumps everything. When I got her she was doing 1.35m with an amateur, but I think she’s very nice, very careful, but very green.”

Barrios continually tops the leader board at the Kentucky Spring Horse Shows, and concluded, “I feel like this is home for me. The horses like it; the footing is great, the weather is wonderful, and the facility is excellent.”

The jumper action will continue in the Rolex Stadium tomorrow evening with the $25,000 Hagyard Lexington Classic, kicking off the seven part Hagyard Challenge Series featuring the Leading Rider Bonus. Riders will also have the opportunity to showcase their mounts during Saturday’s $20,000 Bluegrass Classic and the $75,000 Commonwealth Grand Prix on Sunday afternoon.