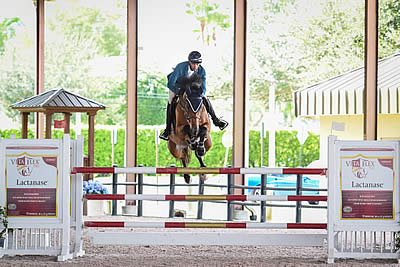 Wellington, FL – September 1, 2019 – Although impending weather led to a revised schedule, the ESP Summer Series continued this Labor Day weekend with competition held on Friday and Saturday. Pablo Barrios of Wellington, FL championed the Lactanase 1.35m Open Stake at Equestrian Village on Saturday afternoon aboard Gut Einhaus, LLC’s Le Vio. Barrios and Le Vio were the eighth combination to enter the arena and after a clear first round, they continued to complete the jump-off course in just 39.2 seconds. Nataly Leibovitz of Wellington, FL and her entry, Leon, were the only other pair to have a double-clear performance. They held the lead for the first half of the class after their 42.624-second jump-off. Rounding out the top three finishers was Clotilde Lewis of Aventura, FL piloting her Donna Vi through the timers in 42.5 seconds with four faults in the jump-off.

Saturday’s course was designed once again by Hector Loyola and challenged a total of ten entries, of which five returned for the second round. After the class, Barrios commented, “There were enough clear to have a fun jump-off, and I knew I had two more [entries] behind me so I had to go as fast as I could.” Barrios has been competing with the ten-year-old gelding for two years now. “He’s just coming back from a break. He was jumping some 2* and 3* classes and doing really good.” Barrios continued, “Our last horse show was in Tryon and he won three classes so he’s going pretty good this summer.” The duo is planning to stay in town over the next few months: “We’ll let the hurricane pass; hopefully it misses us, and then we’ll just get prepared and train for the next season at WEF.”

To learn more about the ESP Summer Series and PBIEC, please visit www.pbiec.com.