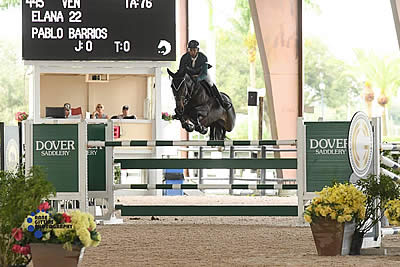 Wellington, FL – October 29, 2019 – ESP Fall III competition was hosted this weekend at Equestrian Village with exciting National A and Jumper 3* action. The first $25,000 National Grand Prix of the Fall series saw an impressive turnout in both exhibitors and spectators on Sunday afternoon. Pablo Barrios of Wellington, FL and his Elana 22 ultimately captured the blue ribbon in the $25,000 CCTV Agent Grand Prix after completing the jump-off in just 36.674 seconds. Alberto Michan of Wellington, FL piloted Loribri, owned by Marie Antonette Leviste, to a second-place finish after a 37.242-second jump-off. Very close behind, with a 37.286-second jump-off, was Theo Genn of Lebanon, OH and Eduardo Leon’s Firewall to claim third. Other notable finishes included Taylor St Jacques of Glen Allen, VA and her entry, Upsilon De La Liniere, with a 39.066-second jump-off and Maria Brugal of Wellington, FL with her mount, Aragorn Van Schuttershof, putting in a 39.311-second jump-off to take home fourth and fifth place, respectively.

A total of 19 trips were seen in the first round of the Grand Prix, with 12 returning for the jump-off, hosted in the VanKampen covered arena due to rain. Course designer Hector Loyola built the track on Sunday as well as the qualifying $10,000 CCTV Agent 1.40m Open Stake that took place on Friday afternoon on the Derby Field. Luis Larrazabal of Wellington, FL and Esperanza Mia, owned by Carlos Enrique Morstadt, bested the field of 21 competitors with a jump-off lasting only 39.462 seconds, while Santiago Lambre of Wellington, FL rode Doloris to second place in 41.177 seconds. Kim Farlinger of Wellington, FL and Keren Halperin-Guy’s Feestje B. crossed through the timers at 41.545 seconds to claim third place.

“It was a bit of an adjustment today to jump in the covered arena since we were on the grass on Friday, but honestly, I think my mare jumped a little better indoors than she did outdoors so it worked in our favor,” said Barrios after his win on Sunday. When asked about the jump-off and how he prepares, Barrios stated that he prefers Sunday’s format (2a) versus the 2b format that was used during the Open Stake: “Specifically, with a horse like this that is very hot, when it’s the back-to-back format, I don’t have time to make her calm down and reset after the first round, so [today’s format] worked in my favor too.” Barrios will return with Elana 22 next week to compete in the $25,000 National Grand Prix set to take place on the Derby Field.