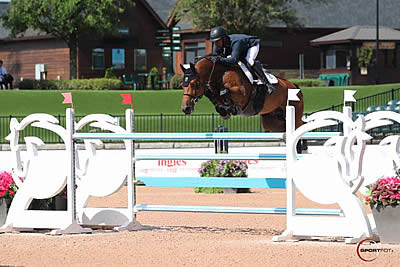 Mill Spring, NC – July 8, 2019 – Pablo Barrios (VEN) and Le Vio sped to win the $36,000 Sunday Classic CSI 3* at Tryon International Equestrian Center (TIEC), stopping the jump-off timers at 28.837 seconds with no faults to claim their third FEI win of the week. Steve Schaefer (USA) and Valinski S, a 2002 Dutch Sport Horse gelding (Nijinski x Julius) owned by Wyndmont Inc, took second place on a clear jump-off performance of 29.603 seconds, while Sharn Wordley (NZL) and his own Gatsby, a 2004 Irish Sport Horse stallion (Simba x Cruise On), claimed third-place honors with another clear round and a time of 30.602 seconds.

Barrios and the 2009 Hanoverian gelding (Van Gogh x Drosselklang II) owned by Gut Einhaus LLC, were one of 11 pairs to be tested in the jump-off track, designed by Alan Wade (IRL). Barrios went in with a plan to gain the advantage: “I think I found a super nice [jump to] number one that allowed me to do eight strides. The [distance from] one to two was pretty far and I couldn’t bend it. I turned really quick to the combination, [jump] seven to eight, and I was able to do six strides to the final jump and I think that was the key,” Barrios revealed.

He continued: “Alan has done a great job; he’s a great course designer, and I love when we come here. He really tests the horses and he knows the feel of the riders and horses. It has been a very nice week; all the courses have been good and very fun to ride!”

Barrios and Le Vio have been together for almost a year, competing in major Grand Prix competitions and even winning the gold medal for Individual Jumping at the 23rd Central American and Caribbean Games Barranquilla 2018. “He has been a very good horse so far. Every time he’s showing a little more scope [over the jumps]. This week I put it down a little bit and just decided to jump the speed classes and the lower classes. He’s very quick and he covers the ground – I mean, he’s a super careful horse.”

Barrios’ win to wrap up Tryon Summer 4 at TIEC came following a very successful week aboard Le Vio: “[Le Vio] was perfect this week. He won three classes this week out of the three that he jumped, so that’s very impressive. He is a winner, but I never expected to win three classes in the same week!”