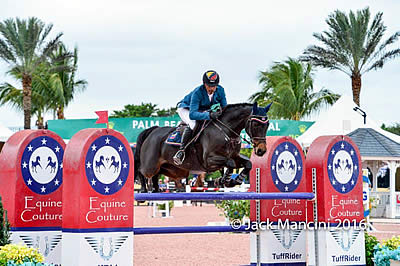 Wellington, FL – November 2, 2016 – Pablo Barrios of Wellington, FL and Charity 33 rode to top honors at ESP Fall III taking the $25,000 Fall Grand Prix at Palm Beach International Equestrian Center (PBIEC). Barrios and Charity 33 topped the jump-off with a time of 41.068 seconds. Derek Petersen of Archer, FL and Diamant’s Legacy finished just off the winning pace after crossing through the timers in 42.182 seconds. Hector Florentino of Wellington, FL and Allure G collected third place after completing the track in 42.729 seconds.

“First of all it’s nice to be back in Wellington after being away for such a long time. It was very nice to win with Charity because she’s a new mount for me,” commented Barrios. “I’ve been riding her for the last two months and she’s awesome. She can win any class. We’re getting along very well and I’m very happy to have won this class.”

Barrios guided the 2005 Westphalian mare (Cayetano L x Indoctro) to the win in the class, which hosted 22 entries and saw six combinations in the jump-off. The course was designed by Skip Bailey of Wellington, FL and was the first major grand prix of the ESP Fall Series.

“She’s very spicy and competitive. She’s a fighter in the ring, like any other mare,” added Barrios. “She’s very little but she is a very competitive horse. I’m glad to have her in my string of horses right now. I’m looking forward to winning some other classes on her in the 1.45m speed classes on her this season.”

In preparation for the competitive winter season ahead, Barrios was pleased with Charity 33’s performance, as he hopes the mare will be the newest addition to a string of talented horses he has coming through the ranks for the nation of Venezuela.

“As always, it is a very tough circuit here and it’s one of the hardest horse shows of the year. We all know that we have to be prepared for that,” he commented. “The thing is that it’s about getting ready for what we’re going to see and what we’re going to face. I’m glad to be here early to be able to begin preparing.”

Representing his home nation of Venezuela at the 2016 Olympic Games in Rio de Janeiro this past summer, Barrios has focused his fall campaign on the training and education of young horses, noting that their experience will become be a staple in the success of his team looking towards the future.

“We have a few young horses that I would like to take the opportunity to show the International Ring and develop. There are expectations for them to do the larger classes further on in their careers and this is a great opportunity for them to get in the ring and experience that atmosphere.”

Derek Petersen of Archer, FL and his own Diamant’s Legacy, a 2009 Oldenburg stallion by Diamant de Semilly, captured top honors in the $10,000 Welcome Stake and a strong second place finish in the $25,000 Fall Grand Prix, marking a successful outing for the pair. Petersen and Diamant’s Legacy crossed through the jump-off timers in 35.735 seconds for the win. Paige Jardine of Mildura, Australia and her own Anicmo rode to second place with a time of 38.489 seconds, while Jared Petersen of Archer, FL and Titus 2:11 took third after completing the track in 38.747 seconds.

The class saw 20 entries take to the International Ring as an opportunity for horse and rider combinations to test their skills ahead of the $25,000 Fall Grand Prix hosted on Sunday. Nine riders advanced to the short course, while five pairs secured double clear efforts on the day.

“I think the course rode really well. There was a two stride vertical to vertical combination that was pretty tricky and tough,” commented Petersen. “You had to really think about keeping that one up at the back of the combination. He’s just a seven year old and I’ve been so impressed with his demeanor and attitude.”

Diamant’s Legacy is a young stallion just entering the prime of his career and Petersen is optimistic that the duo can reach the top levels of the sport, as the pair has already accumulated several grand prix wins this year.

“We imported him last year. I breed quite a lot at home and he’s the new boy in town,” laughed Petersen. “He’s unbelievably mature for his age. He’s just like riding a 15-year-old veteran. He’s super cool and easy so we’re excited about his future. He’s already had a lot of success.”

The $1,500 NAL Child/Adult Jumper Classic saw Sabischy Hassler of Wellington, FL and her own Nepturo HM top the class as they completed the course in 35.711 seconds. Taje Warrick of Wellington, FL earned second and third place aboard her mounts Dersey and Mufasa respectively, capping a fantastic weekend for the rising star.

Zachary Yariv of Wellington, FL and his own Missi Cassini captured the $2,500 Low Junior/Amateur Owner Classic with a jump-off time of 41.284 seconds to best the class of 17 entries. Hasbrouck Donovan of Gainesville, FL and Spitfire-W took second place in the class, while Nicole Lootchan of Hawthorn Woods, IL guided her own Memory Lane to third with a time of 40.544 seconds.

Bruna Silva of Windemere, FL and his own Biondetta rode to victory in the $1,500 Low Child/Adult Classic presented by Equine Couture & TuffRider after the pair crossed through the finish in 42.498 seconds to best the class. Alexandra Boord of Key Biscayne, FL and Zanina, owned by Perla Boord, earned the red rosette with a time of 48.641 seconds in the jump-off. Tinita Hughes of Wellington, FL and her own Proximo took third place after accumulating four faults in the jump-off, but completing the track in the most efficient time, finishing in 40.603 seconds.

Lielle Rhodes of Wellington, FL and Legendary, owned by Michael Dietrich, rode to the top of the Children’s Hunter Division presented by UHealth Ear Institute and collected champion accolades for their performances. Claire Lube or Orlando, FL and Cordiacado, owned by Kyle Dewar, were presented with reserve champion honors.

Olivia Sweetnam of Wellington, FL guided Falling Moon Huckleberry, owned by Richard Cunkle, to champion awards in the Small Pony Hunter Division, while Allison Coleman of Wellington, FL and her own Shenandoah Jack Be Nimble rode to the reserve title.

The Children’s Pony Hunter Division presented by The Wanderers Club saw Emma Vandenhouten of Plantation, FL and her own Spiderman, rise to the top of the division, as Savannah Richards of Jupiter, FL and her own Her Prince Charming, collected reserve champion.

Hasbrouck Donovan of Gainesville, FL and Cymplify took the top title in the Performance Hunter 3’3″ Division presented by Gold Coast Feed following their consistent performance throughout the weekend’s competition. Kelsey Donahoe of Ocala, FL and her own Ausone took reserve in the division.