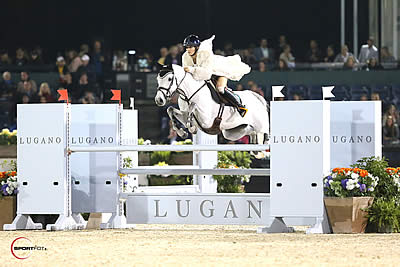 Wellington, FL – February 1, 2020 – Palm Beach County cheered as equestrians and their mounts, representing local non-profit organizations, competed for a share of more than $1 million in prize money at the Great Charity Challenge presented by Fidelity Investments® (GCC) on Saturday, February 1. Held at the Palm Beach International Equestrian Center (PBIEC), the GCC has become a highlight of the 12-week Winter Equestrian Festival (WEF) and has distributed over $15.8 million to 256 local organizations in 11 years.

The winning team of riders, Jessica Mendoza riding Flashback VDS, Caroline Mewhinney aboard Ballerine de Revel, and first time GCC participant Ana Sofia Rodriguez on Carolina du Toultia Z, sponsored by team sponsor Van Kampen Foundation and corporate sponsor CGM Farms, came in the ring to the music of the Broadway musical “Chicago” and finished with a time of 94.912 seconds. Their strategy and teamwork paid off for Spirit of Giving Network, a local non-profit organization that creates alliances with nonprofit organizations by sharing resources and providing education to strengthen local communities through a variety of causes. They earned the top prize of $150,000. The sliding scale for the balance of the proceeds, down to 24th place, won a minimum of $15,000, ensuring that everyone was a winner.

“The Spirit of Giving is a collaborative non-profit, and we have 72 other non-profit members underneath us that benefit families and children, but we have a lot of variety too,” said Executive Director Lindy Harvey. “So, not only is this helping us, it’s helping 72 other members and thousands of local children. It’s a very big win for us.”

From a starting field of 39 horses, 11 advanced to the tie-breaking jump-off set by Brazilian course designer Anderson Lima. After pocketing a grand prix win earlier in the season, Mexico’s Santiago Lambre was poised for a repeat before Farrington and Creedance charged into the ring. Farrington utilized the 13-year-old Dutch Warmblood gelding’s exceptional speed to steal the lead by just under half of a second.

“Creedance is an exceptional horse; he’s naturally so fast and such a winner,” said Farrington of his mount (Lord Z x Notaris). “He’s unbelievably careful and at the same time very brave. He delivered like he usually does, and I was very proud of him today.

“I try to show him where he likes and not overuse him in places where I don’t think he needs to jump,” continued Farrington on how he manages Creedance’s schedule together with co-owner R.C.G. Farm. “I try every winter when I’m here to pick a few weeks where he comes out. The caliber of horses here is very high, and that’s why I think you saw such a strong result from a lot of people today.”

The Small Junior Hunter 15 and Under division came to a close on Saturday in the Rost Ring with Augusta Iwasaki riding Heaven’s Dream to the championship. Iwasaki catch rode two horses in the division, but Heaven’s Dream came out on top.

Iwasaki and Heaven’s Dream won two classes on the second day of the division, and also received a second in the under saddle along with fifth and sixth places to rise to the top.

“He’s always game and does whatever is asked of him,” Iwasaki said of Heaven’s Dream, a 10-year-old Dutch Warmblood gelding by Arko III.

Iwasaki rode Heaven’s Dream, or “Dreamy”, for owner Isabella Griffin of Hampton Cove, AL. Dreamy was recently imported during the indoors season, so he is still fairly new to showing in the United States. “He’s really beginning to put everything together in the ring,” Iwasaki described. “He is just a cool horse and also really nice to ride.”