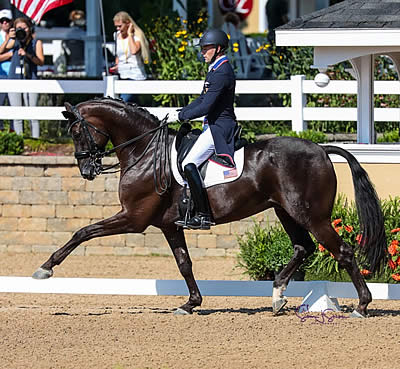 Wayne, IL (August 26, 2019) – Endel Ots’ summer roller coaster ride with his horse Lucky Strike ended in glory this past weekend with the pair taking a well-deserved victory lap in the blue cooler that signified that they had indeed won the US National Intermediaire Championship title.  This is the pair’s third and most prestigious victory lap at the U.S. Dressage Festival of Champions which was again was hosted at Lamplight Equestrian Center in Wayne, Illinois.

Ots and Lucky Strike (Lord Laurie-Heidi X His Highness), the 9 year old Hanoverian gelding owned by Endel Ots and his father, Max Ots, were at the top of the rankings in the division this year, but in July they were selected for the US Dressage Team headed to represent the country at the Pan American Games in Lima, Peru so they did not expect to compete in this year’s Festival of Champions, but fate had other plans.

While en route to the Miami airport with the other US Dressage Team horses, a malfunction in Lucky’s stall on the shipper’s van caused him to scramble and fall.  Lucky sustained cuts in several places that would make it impossible for him to travel to Lima. Instead of focusing on a dream lost, Ots swung into action. “It was hard realizing I wasn’t going to compete in Peru, but in that same week I was overcome with gratitude when I learned that Lucky was going to be 100% okay. I decided to focus on the Festival of Champions,” said Ots. A decision that proved to be a good one, as the pair was undefeated throughout the competition and rode away as the US National Intermediaire Champions.

This year’s Championship win was filled with special moments for Ots for a number of reasons. Ots was determined to overcome the disappointment of not being able to join the US Team in Peru for the Pan Am Games, but he hadn’t counted on the support from his Pan Am Game teammates at Lamplight.  Jennifer Baumert and Nora Batchelder were cheering Ots on from the side lines, while Sarah Lockman communicated encouragement from her from a hospital bed in California (where she was being treated for non-horse-related condition). “To be supported by my teammates here at the Festival brought me immense joy.  I am so grateful to each of them for their support; it made the competition even more meaningful to me. Thank you, Jenn, Nora, and Sarah,” said Ots with sincere gratitude.  In addition, Charlotte Bredahl, the U.S. Dressage Development Coach who has been helping Ots prepare for months, was on hand with last minute encouragement. “Having Charlotte at the Championships was such a bonus.  She’s amazing and I knew she would give me constructive feedback.  I am so lucky to have her help and support,” said Ots.

The support of his coach and teammates was accentuated by having his father Max Ots being on hand again this year for competition. Max joined Endel in the awards presentation helping to keep the enthusiastic gelding on the ground as he waited for his victory lap. “My Dad has always taught me to just keep moving forward when bad things happen. After the disappointment of the Pan Ams, he told me how proud he was of me for my hard work and my ability to rally for this Championship,” said Ots with emotion. “His support of me on this journey is one of the memories I will cherish for a lifetime.”

Ots and Lucky won all three classes in the small tour, starting with a 74.5% winning score in the Prix St. George, followed a 73.853% in the Intermediaire I and a 74.5% for their crowd-pleasing freestyle featuring music from the TV show ‘Mad Men’ as well as Frank Sinatra classics. Ots is a big fan of the Mad Men TV series and Lucky Strike was named after the show’s main character Don Draper’s ad account, Lucky Strike. “Having the Mad Man music in Lucky’s freestyle really reminds me to have a little fun in the freestyle,” explains Ots with quirky smile.