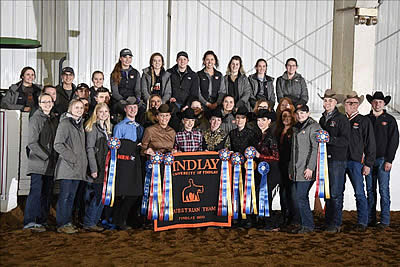 Fairfield, Conn. – March 20, 2019 – The Intercollegiate Horse Shows Association (IHSA) held its Western Semi-Finals, sponsored by the National Reining Horse Association (NRHA), March 16-17. Hosting the events were Florida State University (FSU) at the Florida Horse Park in Ocala, Florida, Utah State University (USU) at their facility at the USU Equine Center in Wellsville, Utah, and University of Findlay at their facility in Findlay, Ohio. IHSA is celebrating its 40th anniversary of the Western divisions this year.

“The horse show was really well run and the stars were aligned for us,” said Ollie Griffith. “Our riders were ready to go and things just worked out really well and we got paid to what we did. It was nice.”

Griffith said that Erin Bosse, a senior this year, has come really far in the program and contributed to team win by earning the blue ribbon in both the Team Open Horsemanship and Team Reining. Bosse also clinched the win in Individual Open Horsemanship. Second-place finisher Sarah Cooper, from Berry College, will join her to compete at Nationals along with Travis Fortune, from Murray State University, and Matthew Winter, from the University of Florida, who were third and fourth, respectively.

“The way we look at it, there are eight teams we need to try to be better than, and those are the eight that qualified, including the two that followed us,” Griffith said and about the upcoming Nationals in Syracuse. “Many years at Nationals, the teams that don’t win the Semi-Finals step up and play their game.”

In Individual Reining, the judges’ top pick was Ethan Stratford, from the University of Guelph. The second and third place prizes went to Mary Catherine Wade and Jenna Seal, both from Middle Tennessee State. Fourth-place Bosse will compete at IHSA Nationals in both Individual Reining and Open Horsemanship. Lynn Palm, from Ocala, Florida, and Allen Mitchels, from Michigan City, Indiana, officiated at the FSU-hosted event.

Semi-Finals at Utah State University
Utah State University hosted their first-ever Semi-Finals at their Equine Center and live-streamed the event for fans and families across the country. IHSA founder and Executive Director Bob Cacchione participated in impressive opening ceremonies and was on hand to present prizes and greet coaches and riders. Judges Dawn Kreakie from Seville, Ohio and Lori Gordon of Washington, Pennsylvania presided over the event.

“It was my fourth and final time going to Semi-Finals,” said Racheal Nordby, captain of the Oregon State University team. “It was awesome. I loved their opening ceremony.”

Nordby started as an Open rider and has competed on the team all four years and qualified for Nationals every year. After graduation, she plans to take a year then go on to get her master’s in clinical psychology. She credits her Oregon State coach Dawn Ross for her support through her years on the team.

“She is like a little angel from heaven,” Nordby said about Coach Ross. “She inspires us all to work harder as individuals and as a whole. She’s a very strong leader. She knows how to support us and how to challenge us.”

In the Individual Open Horsemanship at Utah State Semi-Finals, it was déjà vu for Rocky Mountain College’s Codi Uecker who won the for the second consecutive year. She will be joined by second-place finisher Danielle Paulson, from the University of Wisconsin, River Falls, at Nationals. Third-place finisher Sarah Beth Felker, from St. Andrews University, and fourth, Christina Mulford, from Northern Kentucky University, will also make the trip to Syracuse.

Jacob Kamm, from the University of Cincinnati, grabbed the win in Individual Reining, with Aubrey Braham, from Slippery Rock University, in second, repeating her results from last year. Caitlyn Davis, from Utah State University, and Kindra Gingerich, from Saint Mary of the Woods College, were third and fourth.

Semi-Finals at University of Findlay
The 2018 IHSA Western National Champion Findlay Oilers hosted a third Semi-Final event. Carolyn Johnson Russell, from Ringgold, Georgia, and Pete McAllister, from Mitchell, Indiana, judged the event. The Findlay team finished in the lead on their home turf, winning five classes and earning 39 points. Northeastern Oklahoma A&M College and the University of Nebraska, Lincoln finished in the second and third positions with 23 and 20 points, respectively, in the overall Team competition and will progress to the IHSA National Championships in Syracuse.

“We have a great team that is willing to put in the work – the long nights and early mornings,” said Spencer Zimmerman, head coach of the University of Findlay Western team. “They love being around the horses and the competition and they take their jobs seriously.”

Zimmerman is only in his second year in the position at Findlay and he will lead his team to Syracuse to defend their 2018 championship title.

“Three of our team riders are returning (to compete at Nationals) from last year,” Zimmerman said. “I look forward to seeing them in the pen. But I also look forward to seeing our new riders that haven’t been to Nationals. To take on that challenge, and coach them through those nerves is a lot of fun. I like to try and help them to overcome their obstacles to be successful.”

Carfora brought her game to the hotly-contested Individual Reining division, finishing in front. Woellmer scored second. Julia Roshelli, from the University of Findlay, and Cailyn Simonis, of North Central Texas College, had the third and fourth slots to qualify for IHSA National Championship Horse Show in Syracuse.