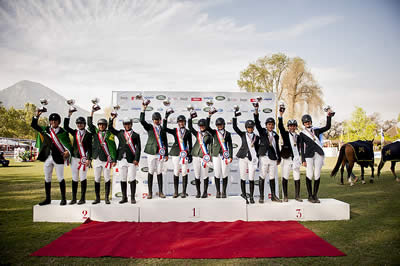 Vitacura (CHI), 17 October 2014 – Brazilian young guns were all but unstoppable at the FEI Americas Jumping Championships for Young Riders, Juniors, Pre-Juniors and Children 2014 which took place at Vitacura in Chile from 6 to 12 October. The history of these Championships is a long and significant one. For almost 40 years the region has consistently encouraged its youngest Jumping athletes through the staging of Championship-level competition, and Brazilian star, Doda de Miranda, first displayed the talent that would take him right to the top when claiming Junior gold at Sao Paolo back in 1990.

Brazilian riders have long been dominant, claiming all the gold on offer at last year’s event in Rosario, Argentina when they also filled all three steps of the podium in the Individual Junior category. This time around they took all three medals in the Children’s, Pre-Junior and Junior Individual competitions, but the host nation’s Paola Labbe put a stop to their gallop with a clear-cut victory in the Young Riders Individual. The 20-year-old headed a field of 17, and she left a host of Brazilians in her wake.

The world’s most popular ringmaster, Pedro Cebulka who has played an essential role at many top international fixtures around the globe including the equestrian events at the London 2012 Olympic Games and the recent Alltech FEI World Equestrian Games™ in Normandy, ensured the big number of entries was smoothly channelled into the arena throughout the busy programme of events.

It took a three-way jump-off against the clock to decide the Children’s team title when two Brazilian selections, and Chile’s No 1 side, were all matched on a zero score.

Chile 1 posted a time of 100.32 with a total of four faults to line up in bronze medal spot.

It came down to a six-way battle for the Individual medals, with five of the six contenders flying the Brazilian flag. Team Amarello’s Fonseca, Brasileiro and Hardman were joined by Giovanna Lara and team gold medallist Bernardo Braga, while Argentina’s Manuel Chechic also went through to the deciding jump-off when all six never touched a pole through five tough rounds of competition.

Chechic and Braga each had a fence down against the clock, while Lara finished just outside a podium placing when 14-year-old Fonseca produced the quickest time of 32.68 with the 11-year-old mare ACL Miss Mirage for the gold. Brasileiro clinched silver with Charleston Jmen when breaking the beam in 32.9 and Hardman took the bronze with Ravell Vila Fial in 35.23 seconds.

Brazil again took gold and silver in the Pre-Junior team event while Argentina Blanco claimed the bronze. Rodrigo Junqueira (Corlanda ll Jmen), Caroline Nehrer de Souza (Lietus), Isabela Piovesan Dall’Oglio (GTI 3) and Laura Ramos Rait (MD Quastor Jmen) posted a four-fault tally over two rounds to decide the result in favour of Brazil Amarela, but it came down to a two-way tussle between Brazil Verde and Argentina Blanco for the remaining two sets of medals when they shared a six-fault second-round scoreline.

And it was an extremely close-fought affair right to the end, with Verde’s Rodrigo Jardim de Rosa (Capuava Jimen), Victoria Junqueira Ribeiro (Ulrike van het Hellehof), and Pedro Backhwuer (Q’Pleasure de Bacon) all staying clear while Frederico Morais Menezes (Chaman Z) produced the drop-score of eight. Their combined time was 102.18, and this gave them the silver despite the fact that all of their Argentinean rivals, Maria Pilar Ganzabal (Racional JED), Alex Dircie (Remonta Jamaiquina), Francisco Leonforte (Nurmi Rouge) and Josefina Rico (Enterriano JR) kept a clean sheet. However, with the best three results counted, they were 0.82 seconds slower and had to settle for the bronze.

Team gold medallist, 15-year-old Laura Ramos Rait, led the individual rankings from the outset and could not be caught. Another double-clear with MD Quastor Jmen on the final day ensured she went home as a double-gold medallist, and Brazilians completely dominated the line-up here with Siew Chiang Cheng taking the silver with Asterix TW and another of the gold medal winning side, Isabela Piovesan Dall’Oglio, claiming the bronze.

Ramos Rait has a formidable record in these Championships, having finished fourth in the Children’s division at Passo Fundo in 2012, and taking both Individual gold and team silver in the Children’s category at Rosario last year, each time partnering the same trusty bay gelding, Quastor.

The Junior team honours went to another Brazil Verde side, with Argentina Celeste taking silver and Brazil Amarela the bronze this time around. There was no doubting the supremacy of the gold-medal-winning side when Gilberto Keiji (Atlanta Vll), Alberto Bento (Sharapova MCJ), Giulia dal Canton (Keep on Fighting) and Patsy Mourao (Dobra) were the only foursome to return a zero first-round score, while Keiji was the only one to make an error second time out.

Only one of the silver-medal-winning Argentinean side managed to complete a double-clear, the fourth-line combination of Santiago Orifici and Boris. But Santiago Brandolino (Hassan Cooper), Lihuel Gonzalez (Elcaro CZ) and Martina Campi (Resistire Piam) backed up this great performance to post a final tally of 17 faults which left them a full 14 faults ahead of Brazil Amarela in bronze. Rafael Rodrigues was eliminated in the first round and retired with Calousco second time out, but team-mates Sarah Rocha (Warthagena) and Pedro Moura (Royal Flol HV) each produced a single clear round and when Bianca de Souza (Abernante) collected 12 that was still good enough to make it onto the last step of the podium.

The medals in the Individual Junior Championship went to three of the team gold-medal-winning side headed up by Giulia Dal Canton. The 16-year-old finished third in the first qualifier and her 12-year-old Oldenberg gelding, Keep on Fighting, lived up to his name to remain flawless from there on. Patsy Mourao and Dobra took the silver while Alberto Bento and Sharapova MCJ claimed the bronze.

It was only when it came to the Young Riders section that the tables were eventually turned, but not until after the Brazilians reigned supreme once again in the team event in which they also took the bronze while Argentina divided the two sides when slotting into silver medal spot.

It took a two-way jump-off between Ferrantelli and team-gold-medallist Thiago Aquino to decide individual silver and bronze, and it was Ferrantelli who got the nod when clear in 43.43 while Aquino retired in that final round.

Chile’s Labbe, however, put individual gold beyond doubt when her final score of 21.74 left her well clear of the rest of the field with her grey Holsteiner gelding Chinquin JL.

Once again, the story of these Championships was about Brazilian strength but also about a big appetite for the sport in many of their neighbouring countries. And with the Rio 2016 Olympic Games now less than two years away there is every incentive for young athletes in the Americas to be inspired to further, continuing success and, perhaps, a place for themselves amongst the stars in years to come.