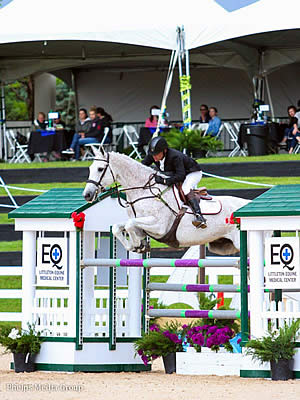 Parker, CO – June 14, 2014 – John Pearce left the others in the dust in the $25,000 Littleton Equine Medical Center/Platinum Performance Grand Prix, blazing through not one but two speedy jump-offs to capture the win with Chianto and second place with Johnny B Good. Karen Cudmore and Southern Pride finished third in the feature event of Summer in the Rockies II at the Colorado Horse Park.

Pearce had plenty of competition in the jump-off, with four other horse and rider combinations from the 21-horse field joining his two horses in the race for the top prize. Among those were Paul Rohrbach and Camerino, who won last week’s $25,000 Holiday Inn of Parker Grand Prix and were looking to build on that success. But Pearce was unstoppable with the two horses owned by Forest View Farm, and Chianto was quickest of them all.

“That horse is such a star,” Pearce said of Chianto. “He’s won more grand prixs than I can count.”

The event kicked off with a horseless jumper class for children, who raced around a course of beautifully designed small jumps. It set the festive mood for the afternoon, and spectators got into the competitive spirit, eagerly applauding clear rounds and cheering on each horse and rider who took center stage in the Kathy and Brad Coors Family Grand Prix Arena.

Representatives from sponsors Littleton Equine Medical Center, a well-respected large animal clinic in Littleton, CO, and Platinum Performance, producers of top-quality supplements, were on hand to watch the grand prix, and Colorado Horse Park founder and president Helen Krieble thanked them for their commitment over the years.

Hector Loyola designed the course with the aim of creating a fair test for the grand prix veterans in the field as well as those less seasoned at the upper levels. There was no single bogey fence, and rails fell throughout the course. Loyola said that he likes to put questions all around the course but also create an element that is a central focus for riders.

“The big question of the whole course was at fences 8, 9ab and 10,” he said. “I didn’t want to get too many people there, which I didn’t, but I did get them to concentrate on that line. That was the main part of the course that I put all their attention on. I thought it was a very fair course for everyone competing.”

That question asked riders to navigate a bending line from the Littleton Equine Medical Center oxer to a vertical-vertical combination, followed by another bending line to an oxer. The combination, set off the rail toward the center of the ring, tripped up a few horses, but many others successfully cleared the challenging element.

Rohrbach, of Parker, CO, and Camerino, owned by Wells Bridge Farm Inc., were first to go and advanced to the jump-off with a clear round. Pearce was fifth to go with Johnny Be Good and secured their jump-off position as well.

The first round was put on hold after the seventh rider due to a passing thunderstorm, but the weather gradually cleared and competition resumed. The first two to return after the hold, Armando Hassey on Taggert Enterprises LLC’s Eminem and Kelsey Van Ackeren on her own Vernon G, were unfazed by the weather and jumped clear rounds to earn enthusiastic applause from spectators.

Karen Cudmore and Southern Pride, owned by Blair Cudmore, joined them a few rounds later, and then Pearce and Chianto completed the group for the jump-off. Loyola had aimed for five to eight clear rounds, and the results were right on the money with six horses advancing.

The jump-off challenged riders to step on the gas and give their all. There were opportunities to save time with tight turns as well as pick up speed and gallop to a couple of the fences. A double combination – fences 9ab of the first round jumped in the other direction – partway through ensured that riders maintained precise control.

“I like to have both long gallops and turns, so there’s a balance of what the riders have to do and a fair chance for different types of horses,” Loyola explained.

Rohrbach and Camerino led off with a four-fault round, dislodging a rail at the combination and finishing in 42.158 seconds. Pearce and Johnny B Good followed them and laid down the first clear with a speedy time of 39.426 seconds.

Van Ackeren and Vernon G were up next. The pair had a scary moment at fence 12, but Van Ackeren made a good save, recovering and completing the short course with jumping and time penalties.

Hassey and Eminem tried to challenge Pearce’s lead with neat, efficient turns, completing a double clear effort in 41.297 seconds. Cudmore and Southern Pride bettered Hassey’s time but couldn’t quite catch Pearce despite a valiant effort. They finished in 40.867 seconds, leaving Pearce and Chianto to jump last and determine which of Pearce’s horses would come out on top.

“I really wanted to win with Johnny because he’s been second so many times but hasn’t won a grand prix yet,” Pearce said. “But I wanted to go fast with Chianto because I didn’t want him to be fourth. The gap between first and second was really tight to fit him in between, so I had to really try to win with Chianto today.”

And Chianto, as he has done many times before in his long grand prix career, came through with a top-notch effort in the jump-off to seal the victory. He made the short course look easy with fluid turns and rapid adjustments, completing it in the winning time of 37.858 seconds.

“I thought it was a really good class,” Pearce said. “I think it’s one of the best classes I’ve jumped here in a while. I don’t say that because I won – I just thought the course was good. We had the right amount clear. It wasn’t too small and it wasn’t too big, and it was technical enough. The class suited the group really well.”