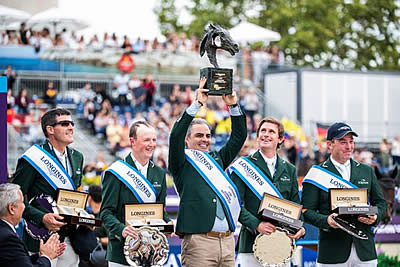 There’s nothing quite like an Olympic year for raising hopes and dreams, and as the Longines FEI Jumping Nations Cup™ 2020 series kicks off there are plenty of horse-and-rider combinations looking to impress over the coming weeks and months with a view to making that trip to Tokyo. Talent-spotting will be the order of the day for team managers and selectors throughout the early part of the new season, which will take in prestigious events in the Middle East and across Europe as well as North America.

Deeridge Farm in Wellington, Florida (USA) is again the venue for the show-opener of the 11-leg 5-Star series, and hosts the first of the three qualifiers in the North/Central America and Caribbean League Sunday, 16 February. The action then moves to Abu Dhabi in the United Arab Emirates for the single qualifier for the Middle East region later this month. Just two countries from each of these leagues will qualify for the annual Final at the Real Club de Polo in Barcelona, Spain in October.

May is going to be hectic, beginning with round two of the America/Caribbean series, at Coapexpan in Mexico, followed by the first leg of Europe Division 1 at La Baule, France followed swiftly by the second leg at St Gallen in Switzerland a week later. And then it’s back across the pond again, this time to Langley in Canada where the last leg of the North/Central America and Caribbean series will take place as the month draws to a close.

From there the Europe Division 1 teams will continue to battle it out for a place amongst the seven nations from this series that will make the cut to the Final. They will visit Sopot (POL) and Rotterdam (NED) in June and Falsterbo (SWE), Dublin (IRL) and Hickstead (GBR) in July, finishing at the British fixture the day before the equestrian events at the Tokyo 2020 Olympic Games begin. The 10 nations competing in Europe Division 1 this season are Belgium, France, Germany, Great Britain, Ireland, Italy, Netherlands, Norway, Sweden, and Switzerland.

Ireland won the edge-of-the-seat 2019 Final, and the celebrations were noisy because this result also gave them the hotly-contested last team qualifying spot for the Tokyo 2020 Olympic Games. And although only Canada, Mexico, and USA can chase down the early-season points in Wellington, the Irish will be out in force again.

There is a super-strong field of runners, with a total of eight teams including Australia, Brazil, Canada, Ireland, Israel, Mexico, Switzerland, and the USA going in to battle. Big names in the mix include the man who led that Irish team to victory, 1998 World Champion and 2004 Olympic champion Rodrigo Pessoa, who has now returned to the saddle to fly the Brazilian flag once again, and two of his Barcelona-winning team-members, Ireland’s Cian O’Connor and Paul O’Shea.

Rowan Willis, who produced a superb performance from his mare Blue Movie to finish individually 12th at the FEI World Equestrian Games™ 2018 in Tryon, USA, will be on the Australian team, while the seven-strong Canadian contingent includes 2008 Olympic champion Eric Lamaze.

Great Britain fields an all-female side that includes Amanda Derbyshire and Emily Moffitt, and Team Israel has listed brothers Daniel and Steven Bluman in its squad. The US selection is filled with super-stars including the multi-medalled Laura Kraut and Beezie Madden, but the ones they may all have to fear are last year’s winners, Team Mexico. Manuel Gonzalez Dufrane is the only member of that victorious side listed again this year, but the passion with which this country’s riders compete makes them a serious force to be reckoned with, so this opening leg looks set to be a cracker.

Check it out here.