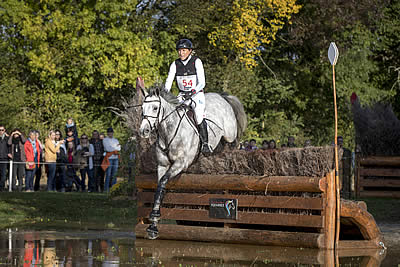 This was the 31st edition of these Championships which have been staged annually since 1992, and spectators flocked into the lovely venue at the Haras National at l‘Isle de Briand throughout the weekend, with a massive crowd of almost 35,000 spectators for Saturday’s cross-country phase.

Exciting new talent was highlighted in both age categories, with a total of 99 horses representing a range of studbooks. The Selle Francais claimed the overall Studbook title with a score of 154.6 points, but finished only a single point ahead of the KWPN in second on 154.7 while last year’s winners, the Irish Sport Horse Studbook, lined up third this time around with their final tally standing at 168.2 when the results of both age categories were analysed.

The Ground Jury for the 6-year-olds consisted of Germany’s Ernst Topp, Ireland’s David Lee and Bulgaria’s Yuri Dinev Valev and, from the field of 40 starters, they placed Germany’s Kai-Steffen Meier and the Trakehner stallion Painter’s Maxim (Philox/Painter’s Moon/Painter’s Row) in pole position after dressage on a score of 40.03.

Belgium’s Lara de Liedekerke-Mei and the Hannoverian gelding Ducati D’Arville (Diarado/Pricilla/Perpignon) filled second spot on 42.3 while Britain’s Izzy Taylor and the KWPN chestnut mare Jockey Club Fleurelle (Vivaldi/Zarelle/Sydney) slotted into third on 43.4. Burton was never far away, however, holding fourth with Fire Fly on a score of 44.2 while Switzerland’s Felix Vogg and Mathurin V/D Vogelzan was sitting in fifth place on 45.3 going into the cross-country phase.

Pierre Michelet’s fantastic cross-country track jumped really well, with just one retirement and three eliminations around the course, and the time-allowed of 8’ 53” proved well within the grasp of most, only nine collecting time penalties on the day. All of the top six held their spots, so it came down to the final jumping round to decide the medal placings.

Vogg and Burton each posted a brilliant clear to finish on their dressage scores, so when all those ahead of them faltered they soared up the leaderboard. Taylor’s single mistake cost her the win, but when double-errors dropped Meier to fourth and Liedekerke-Mei to sixth place, then the British rider claimed bronze behind Vogg in silver and Burton in gold medal position.

There was nothing boastful about Burton in the aftermath, however, the 34-year-old double-Olympian acknowledging that fortune favoured him in the closing stages.

“I am happy,” he said. “There were so many good six year old horses with good riders; I really needed all the luck for this win and I had exactly that in the jumping because my horse touched several poles that didn’t fall! There were others who were not so lucky. My horse performed exactly how I could have wished, and it’s great to finish this season so well.”

It was a case of “déjà vu” for Ingrid Klimke when the German star found herself heading the 7-year-old leaderboard after dressage with the grey mare Weisse Duene (Clarimo/Esprit V/Romino), because that was where the pair placed after the same phase in last year’s 6-year-old competition before a stop and time penalties on the cross-country course put paid to their chances.

This time around the Ground Jury of Austria’s Christian Steiner, Sweden’s Anne Persson and Eric Lieby from France awarded them a dressage mark of 36.9 for a clear lead over Britain’s Pippa Funnell and the AES gelding Billy Walk On (Billy Mexico/Shannon Line/Golden Bash) on a score of 39.0, while Austria’s Charlotte Dobretsberger slotted into third with the Hannoverian mare Vally K when posting 45.2.

British riders were dominant in the early stages in this division, with Kitty King in fourth with the Selle Francais Vendredi Biats (Winningmood van de Arenberg/Liane Normandie/Camelia de Ruelles) on a mark of 45.4 and Gemma Tattersall in sixth with the SHBGB mare Chillis Gem (Chilli Morning/Kings Gem/Rock King) on a score of 45.9. Lying fifth going into cross-country day was the 29-year-old Frenchman Maxime Livio who was the sensational winner of the first leg of the FEI Classics™ 2016/2017 at Pau (FRA) a week ago. Riding the Selle Francais gelding Vroum D’Auzay he slotted in between the two British riders with his score of 45.7.

From a starting field of 59 there were five eliminations and one retirement on the cross-country course, with 19 getting home within the time of 9’11” while 17 collected fence penalties on their tour of the track. Both third-placed Dobretsberger and fourth-placed King dropped out of contention with single refusals, and this saw Livio moving up to third spot behind Funnell and Klimke who retained the top two placings when foot-perfect all the way.

The final jumping phase saw the leaderboard shaken up once again, however, Livio’s 16 faults sending him plummeting right down to 23rd place while some of the biggest names in the sport began to emerge at the top of the scoreboard. Britain’s Tattersall dropped from fourth to seventh with just a single mistake, allowing Germany’s Andreas Dibowski and the Hannoverian FRH Corrida (Contendro/Expo/Esprit) to move into sixth when adding nothing to their dressage mark of 49.9. And when Rio 2016 Olympic Games team gold and individual silver medallist Astier Nicolas, fellow Frenchman Thomas Carlile, and New Zealand’s Jonelle Price did likewise they moved into fifth, fourth and third in the final analysis.

It was a sweet gold-medal-winning success for Klimke whose horse demonstrated the very essence of what these Championships are all about. Things didn’t turn out so well for the pair 12 months ago, but it all came together for them this time around.

“My mare should be the one credited with this win,” said the 48-year-old rider. “Last year her inexperience on the cross country cost us, but this year she was brilliant in the three tests and confirmed exactly what I think of her! She is definitely a mare for the future and she certainly has the potential to go to the Olympics in Tokyo in four years’ time!”