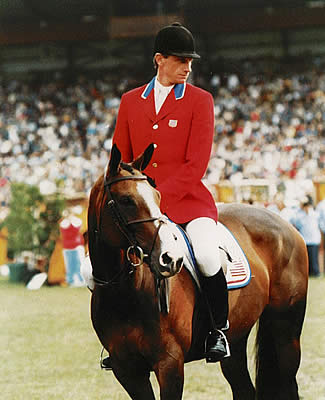 A team and individual gold medalist from the 1984 Los Angeles Olympic Games, Fargis will be inducted into the WIHS Hall of Fame on Friday night, October 26, during Military Night, presented by Caterpillar, Inc., at WIHS, recognizing his five decades of involvement with the show as a competitor and judge as well as serving on the show’s Board of Directors. Fargis won the President’s Cup Grand Prix at WIHS in 1984 aboard his gold-medal Olympic partner, Touch of Class.

“Joe’s skills, awards, accolades and accomplishments in the sport would be more than enough to join the Washington Hall of Fame, standing alone,” said WIHS Vice President Claudia Frost. “But Joe has done far more. He has been an exhibitor, trainer and supporter of the Washington International Horse Show for decades, helping to preserve and sustain Washington as the country’s leading metropolitan indoor international horse show.”

Fargis first attended WIHS in 1959, selling programs at the show while he was a student at WIHS Hall of Fame inductee Jane Marshall Dillon’s Junior Equitation School in Vienna, VA. He showed ponies and junior hunters at WIHS in the ‘60s.

Fargis then graduated to the professional hunter and jumper divisions in 1966. Fargis’ career on the U.S. Equestrian Team began in 1970 and he competed for the U.S. in Nations Cups at WIHS for many years in addition to jumping in the President’s Cup Grand Prix. Fargis would go on to help the U.S. team take silver at the 1988 Seoul Olympic Games riding Mill Pearl and serve on many winning Nations Cup teams, including at the 1985 WIHS. He continues to ride, train, and show today and is based out of Sandron in Middleburg, VA.

Fargis’ Hall of Fame induction takes place during Military night on Friday, October 26, during which riders will test their speed in the $50,000 International Jumper Speed Final and see just how high their horses can jump in the $25,000 Land Rover International Jumper Puissance (high jump).

WIHS’ 60th Anniversary festivities include show programs available at the price that Fargis sold them for in 1959 — just $1! And tickets for the show’s sessions on Tuesday, October 23, are just $2, the same price they were the first year of the show in 1958. A special historical timeline “Through the Decades” will be set up on the concourse, and Philip Smucker, journalist and author of Riding with George: Sportsmanship & Chivalry in the Making of America’s First President, is joining WIHS as the Official George Washington. Smucker will walk the concourse dressed as George Washington, signing books and taking photos.

For more information on tickets and discounts for military, seniors, and students, visit www.wihs.org/tickets.