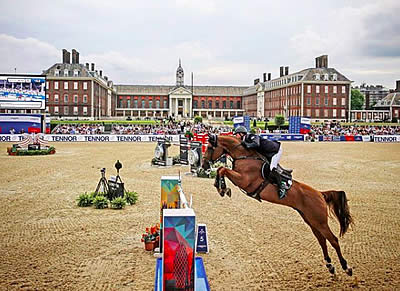 Rome, Italy (August 16, 2019) – Olympic Gold Medalist Ben Maher’s show jumping prowess has been the subject of championship stories at the 2016 Rio de Janeiro Games, the 2012 London Games, and numerous international competitions around the globe. On the famed Longines Global Champion Tour (LGCT) circuit, Maher has consistently topped its destination events over the past two years, and this summer was victorious not only in his nation’s capital of London while representing the home team London Knights, but is well positioned to reclaim his 2018 LGCT Champion of Champions title for 2019.

Maher kicked off the 2019 LGCT season with a second-place finish aboard his anchor KWPN stallion, Explosion W (Chacco Blue x Untouchable), in the LGCT of Doha. Subsequent top finishes for Maher and teammates on the London Knights in Stockholm, Sweden and Casais/Estoril, Portugal further cemented their prestige in the LGCT ranks. From August 2nd to 4th, Maher truly proved his star power, winning the LGCT Grand Prix of London and skyrocketing both himself and his team to top rankings in the tour and league. In a four-horse jump-off and aboard Explosion W, Maher edged out Shane Sweetnam aboard Alejandro and Darragh Kenny aboard Classic Dream to take the win on a time of 38.98. It was double gravy for Maher, who won not only for his home team, the London Knights, but also in his nation’s capital.

Following the LGCT in London and the subsequent LGCT Valkenswaard, Maher sits perfectly poised to pounce at future destinations and be named the 2019 LGCT Champion of Champions for the second year in a row. Maher no doubt has his sights set on further victories and ultimately Tokyo 2020.