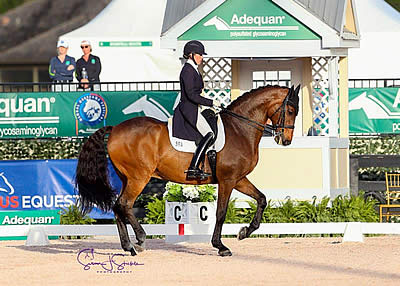 Riding her own Lonoir, a 14-year-old Danish warmblood gelding by De Noir, she notched up 73.319%. The closest chaser was fellow American Arlene ‘Tuny’ Page, who rode Woodstock to 70.298% despite the discomfort of a fractured heel. The Dominican Republic’s Yvonne Losos de Muñiz filled third on Aquamarijn, a 13-year-old mare by United.

“I was happy, though it still wasn’t perfectly clean,” said LaGoy-Weltz, referring to a mistake at the beginning of the two-tempis, which resulted in fours and fives from the seven judges. “It’s awesome that we’re still climbing up the scores despite that. It’s all in there; it’s a question of me learning how to put it together and us finding the right recipe of power and containment. We’re at a point where I need to show; I can get the changes at home, but I need to keep riding it better in tests and he needs to understand the difference between the two tests and find his relaxation and stay on the aids.”

LaGoy-Weltz found Lonoir when he was a seven-year-old at Danish Olympian Andreas Helgstrand’s barn in Denmark when predominantly looking for sales horses with her former boss, Kathy Priest.

“We were also looking for something for me to bring on and I didn’t have a big budget,” continued LaGoy-Weltz, who now trains with Debbie McDonald and is based in Wellington for the season. “Kathy helped me buy him as he was more than I could afford. We got him home and he’s always been a kind horse, but he’s very sensitive to pressure and can get claustrophobic. He needs to chill and Andreas and I have exchanged emails laughing about how far ‘Lono’ has come when nobody really expected that; it’s wonderful.”

The rider from Virginia praised the AGDF circuit, adding: “It’s fabulous. In Europe they have the indoor circuit, and things keep going year-round. For us, this is our circuit and gives us the opportunity to keep going in week after week. And it can be a challenging arena — like Aachen or Rotterdam — it’s not just a quiet arena that we go to week after week and think we’re really going great and then go to these huge venues and get a shock. There are so many shows here and it’s a fantastic opportunity for us.”

LaGoy-Weltz hopes to make it onto the list of eight American riders who will be invited to Europe for the summer to campaign for a place on the FEI World Equestrian Games team. Her next show with Lonoir will be the CDI4*, taking place at PBIEC on March 15-18.

Canada’s Brittany Fraser added to her ribbon count with her second small tour win of the week on Jill Irving’s Soccer City in the Intermediate I CDI1*. The pair was the unanimous winners, finishing on 70.971% — the only plus-70% score in the 11-strong class.

Irving, who bought the chestnut gelding by Sir Donnerhall x Weltmeyer at the 2010 PSI Auction in Germany for a hammer price of €250,000 (around $300,000 USD), has handed the ride to her friend and compatriot while she concentrates on her two actively-competing grand prix horses, Degas 12 and Arthur.