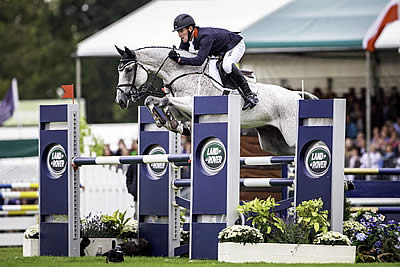 Oliver Townend (GBR) kept his head in a tense final jumping round at the Land Rover Burghley Horse Trials, last leg of the FEI Classics™, to score his first CCI4* victory for eight years and head a British sweep of the top four places.

He overcame a nerve-racking moment when the 10-year-old Irish Sports Horse Ballaghmor Class crashed through the upright gate but, fortunately for him, the previous pair in the arena, Gemma Tattersall (GBR) and Arctic Soul had given him breathing space when they had a fence down.

“This is very, very special. Such a lot can go wrong with a young horse – and he’s only just learned to do flying changes – but he’s in a different class to anything else I’ve ridden recently.” — Oliver Townend (GBR), Burghley winner

Tattersall finished third, slipping one place behind Piggy French (GBR), who jumped clear on the mare Vanir Kamira to move up from fifth after cross country to the runner-up slot. It was a particularly triumphant return for French, who has taken a year off from the sport to have a baby.

“Our jumping round wasn’t that pretty, but who cares? Burghley is the toughest four-star in the world and to do well here is a dream!” — Piggy French (GBR), runner-up

Tom McEwen (GBR) riding Toledo de Kerser rose three places to fourth, a career best, with a beautifully judged clear round and Kristina Cook (GBR), one of the British gold medal team at last month’s FEI European Championships in Strzegom, moved up from 10th to seventh on Star Witness.

Richard Jeffry’s track produced seven clear rounds from the 40 finishers, two of which were with time faults.

New Zealander Tim Price was the highest-placed non-British rider, in fifth on Ringwood Sky Boy. America’s Lynn Symansky was sixth on Donner and Andrew Nicholson (NZL) and the gallant 17-year-old Nereo were eighth with two rails down.

Although Michael Jung had retired across country after a rare mistake with La Biosthetique Sam, the German still secured the top prize in the FEI Classics™ following a win at Kentucky and second places at Pau and Badminton.

“It’s been a brilliant season,” summed up the FEI’s Catrin Norinder, head of the Eventing and Olympic department. “All six events have been thrilling and we’ve seen some fantastic performances from athletes and horses who have portrayed our sport in the very best light.”