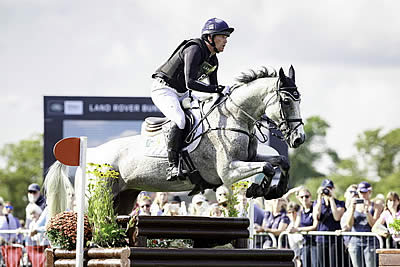 Oliver Townend (GBR), very last out on the cross country at the Land Rover Burghley Horse Trials, sixth and final leg of the FEI Classics™, produced a superb display of horsemanship on the inexperienced Ballaghmor Class to head a British one-two-three.

Townend, 31, won Badminton and Burghley in 2009 and is the British number one, but has struggled to find a consistently top horse since then. However, the Irish-bred 10-year-old by Courage galloped and jumped easily and looks a star for the future, finishing on a score of 40.6.

“Ballaghmor Class was wild as youngster – everyone’s had a go at falling off him – and he has done lots of things he shouldn’t, but then so have I!” — Oliver Townend (GBR), cross-country leader

Fellow Briton Gemma Tattersall held the lead for most of the day on the ex-racehorse Arctic Soul with one of only three rounds inside the time and she is within a rail of Townend going into the final jumping phase with 43.0 penalties.

“Arctic Soul felt strong and feisty, which was not helped by my having a cold, but we have an amazing partnership.” — Gemma Tattersall (GBR), second after cross-country

Izzy Taylor (GBR), whose great-aunt Anneli Drummond-Hay (GBR) won the first Burghley in 1961, is in third place on a new ride, Trevidden, by the great eventing sire Fleetwater Opposition, on 45.6.

“It was one of those rides when you’re having such a great time that you have to remind yourself to concentrate!” — Izzy Taylor (GBR), third after cross-country

As the Brits surged up the leaderboard – Piggy French (Vanir Kamira), Tom McEwen (Toledo de Kerser) and pathfinder Kristina Cook (Star Witness) are fifth, seventh and 10th – there were some unexpected mishaps for senior riders.

Dressage leader Sir Mark Todd (NZL) was up on the clock with Leonidas II when he fell off on landing over the brush at the Discovery Valley (fence 26) and third-placed Michael Jung (GER) and La Biosthetique Sam made the first mistake of their championship career with a runout at a skinny brush in the Trout Hatchery and subsequently retired.

Kristina Cook, fifth on Calvino ll, was held on course in front of the Discovery Valley and perhaps lost concentration as she had a frustrating runout and dropped to 18th place.

Andrew Nicholson (NZL) had a fall with first ride Qwanza at the new Storm Doris fence – angled logs from a tree which fell in the February storm – but is in sixth with 7.6 time penalties on his Badminton winner Nereo.

In an international line-up, Tim Price (NZL) is fourth on Ringwood Sky Boy, by the same sire as Ballaghmor Class, US athletes Lynne Symansky (Donner) and Boyd Martin (Steady Eddie) are eighth and ninth and dressage runner-up Lauren Kieffer (Veronica, USA) is 13th with 28 time penalties.