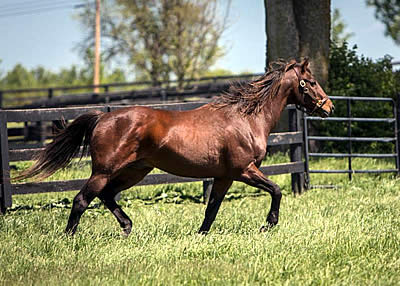 Gulch in retirement at Old Friends (Photo by EquiSport)

GEORGETOWN, KY – JANUARY 17, 2016 – It is with a heavy heart that Michael Blowen, founder and President of Old Friends, announces today the passing of Gulch. The 1988 Breeders’ Cup Sprint Champion and Eclipse Award winner was euthanized this morning due to complications from cancer.

At 32, Gulch was the oldest living Breeders’ Cup Champion.

A son of Mr. Prospector out of the Rambunctious mare Jameela, Gulch has been a resident of the Thoroughbred Retirement Center based in Georgetown, KY since 2009 and was one of the farm’s flagship stallions, attracting visitors and fans from all around the country.

As both a runner and a sire, Gulch blazed an unforgettable trail. Bred by Peter Brant in Kentucky, Gulch became a Grade 1 winner as a two-year-old when he captured the Hopeful Stakes at Saratoga. At three he won the GR 1 Wood Memorial and the first of his two consecutive wins in the GR1 Metropolitan Handicap at Belmont Park.

As a four-year-old, Gulch captured the GR3 Potrero Grande Handicap and the GR1 Carter Handicap en route to his final start and greatest victory in the 1988 Breeders’ Cup Sprint for trainer D. Wayne Lukas. For his efforts Gulch was named 1988 Eclipse Champion Sprinter.

His most notable offspring is 1995 Kentucky Derby and Belmont Stakes winner Thunder Gulch. Other Grade 1 winners include Court Vision, Great Navigator, The Cliff’s Edge, and Wallenda, who is also a retiree at Old Friends.

In all, Gulch is represented by 71 stakes winners, 30 of which are grade or group winners, 72 stakes-placed runners and the earners of $80 million.

Due to declining fertility, Gulch was pensioned from the breeding shed in 2009 and was later graciously donated to Old Friends by Lane’s End.

At the time, Lane’s End principal Bill Farish noted that the stallion’s popularity with fans influenced the farm’s decision to send him to Old Friends, which is open to tourists daily.

“As Leroy Jolley, who was Gulch’s first trainer, once said, ‘Gulch must be the toughest horse who ever lived,’ and he was,” noted Old Friends’ Blowen. “He was confident, self-possessed and regal. He didn’t demand respect – he earned it. He is irreplaceable.”

Old Friends is a 501 (c) (3) non-profit organization that cares for more than 155 retired racehorses. Its Dream Chase Farm, located in Georgetown, KY, is open to tourists daily by appointment. Old Friends also has a satellite facility in Greenfield Center, New York, Old Friends at Cabin Creek: The Bobby Frankel Division, which is also open to visitors. For more information on tours or to make a donation, contact the main farm at (502) 863-1775 or see their website at www.oldfriendsequine.org.