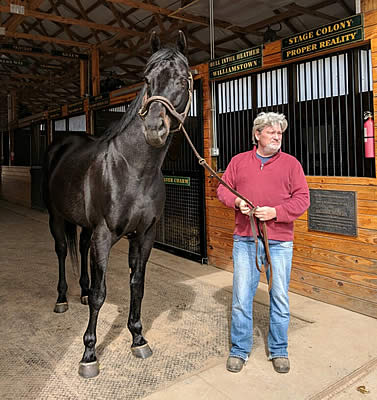 GEORGETOWN, KY – MARCH 11, 2019 – Old Friends, the Thoroughbred Retirement farm based in Georgetown, KY, has welcomed new retiree Einstein. The Brazilian bred son of 1986 Horse of the Year and Kentucky Derby winner Spend a Buck has been pensioned by The Stonach Group’s Adena Springs to the non-profit organization.

Trained by Helen Pitts, Einstein (Spend a Buck–Gay Charm, by Ghadeer) captured the 2009 Santa Anita Handicap (gr. I) and four grade I stakes on turf, including back-to-back triumphs in the Woodford Reserve Turf Classic (gr. IT) at Churchill Downs.

Einstein retired from racing in 2010 to stand at Adena Springs near Paris, KY. He later stood at Adena Springs North in Ontario, Canada and at Magali Farms near Santa Ynez, CA. His top runners include grade III winner Rankhasprivileges and multiple-stakes-placed E Equalsmcsquared.

“We’re extremely grateful to The Stronach Group for allowing us to care for Einstein, and for supporting him with a significant annual contribution,” said Old Friends President and founder Michael Blowen. “Einstein has a lot of fans and I’m sure they’ll be flocking to visit him.

“The great son of Spend a Buck didn’t peak until his six and seven-year-old campaigns,” Blowen continued, “and, as fate would have it, he defeated many of our other Old Friends retirees, including Arson Squad, Commentator, Rail Trip, and Cosmonaut.”

“Einstein was one of the most honest and consistent race horses of modern times,” said Donald Wells, Farm Manager at Adena Springs. “He came very close to being the first horse to win grade 1 races on the turf (Woodford Reserve), synthetic (Santa Anita Handicap), and dirt when he was a troubled third in the Stephen Foster in 2009.

“It has been a privilege to care for such a tough and honest horse,” Wells added. “We know he will be well taken care of at Old Friends, and we look forward to his fan base getting to know and love him the way we have.”