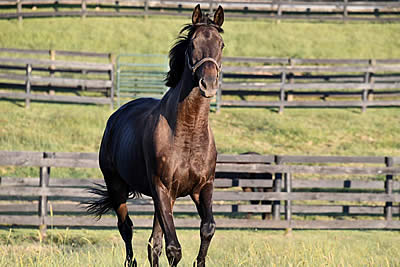 GEORGETOWN, KY – JUNE 25, 2020 – On Saturday June 27, 2020, Los Alamitos Race Course will host the inaugural running of the $125,000 Soi Phet Stakes (Black Type). Previously called the Bertrando Stakes (Black Type), it is a one-mile race on the dirt for California Bred Thoroughbreds 3 years old and up.

Bred by ARCHA Racing Inc. in California, Soi Phet was a son of Tizbud – Summer Jersey, by Siberian Summer. He was owned in his final seasons by the Benowitz Family Trust, Mathilde Powell, and Paul Viskovich, and trained for most of his career by Leonard Powell, who claimed the dark gray gelding at age 5 in 2013 for $16,000.

Without question, the track where he had the most success was Los Alamitos, where he raced in 11 black-type or listed stakes races and won five times.

In 2018, a then 10-year-old Soi Phet scored an especially memorable victory when he won the Crystal Water Stakes (Black Type) at Santa Anita to become the oldest horse to win a stakes race at the track.

CLICK HERE to see Soi Phet win the 2018 Crystal Water Stakes at Santa Anita at the age of 10.

While he never won a graded-stakes, he did run in a few of them. His best finish was a 3rd in the 2013 Awesome Again Stakes (G1) at Santa Anita, behind Mucho Macho Man, who would go on to win the 2013 Breeders’ Cup Classic, and Paynter.

Fittingly, Soi Phet’s final race came in the 2019 Bertrando Stakes. At age 11, he ran the race for a sixth time, finished sixth, and was retired. As a final honor to the fan-favorite, Los Alamitos renamed the Bertrando the Soi Phet Stakes.