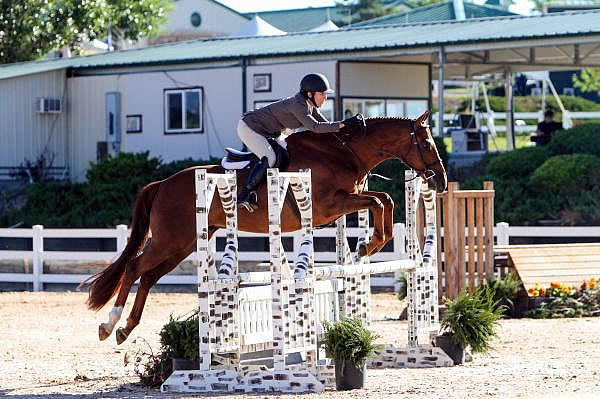 Elizabeth Hund and off-the-track Thoroughbred Timbuktu sailed to a win in the 3’3″ Amateur Owner Hunters.

Parker, CO – July 20, 2013 – Elizabeth Hund’s Timbuktu, a rescued off-the-track Thoroughbred, proved that his new profession in the hunter ring suits him to a T with a win in the 3’3″ Amateur Owner Hunters. Hund and Timbuktu took all the inside routes and tight turns to earn the blue in the handy round.

Hund bought Timbuktu about a year and a half ago. His previous owner had purchased him for a pittance after his racing career ended. When he came to Hund, he didn’t know how to jump and had been out to pasture for some time.

“It just makes you feel great,” she continued. “Here’s a rescue horse that God knows what would have happened to him, and he’s having a good life and being competitive. We’re having fun and then we occasionally win, which is really great. It is the icing on the cake because I didn’t expect anything.”

While it’s taken plenty of work to get Timbuktu ready to compete at this level, Hund said his work ethic has been a big help. “He just has a lovely attitude,” Hund said. “He’s like, ‘I’ll try to do anything you tell me. I don’t know if I can do it but I’m going to try.’ He has a really big heart so he’s been fun.”

She is thrilled to see how far the horse has come and feels he is quickly gaining confidence. “He can often come in for the first round and be a little up and anxious, but he is clearly getting the hang of this because both rounds today he walked in and was like, ‘I’ve got this. I know what I’m doing,'” she said. “He was mellow and easy and totally confident, and that’s one of the things that we’ve had to work to develop.”

Hund rode with much-loved Colorado trainer Keiri Kaneps until Kaneps’ untimely death in 2012, and Kaneps was the one who helped her find Timbuktu. Hund now trains with Ashley Keeler, a friend of Kaneps’ who has taken on many of her former students.

“She’s great,” Hund said of Keeler. “I think she’s quite a good teacher and she’s quite a good trainer. And she walked into a difficult position, when you think about it. Everybody really liked Keiri but she’s not Keiri. But she’s been really professional and she’s put her brand on it and it’s just been great. I’ve loved her.”

Another winner in the 3’3″ Amateur Owner Hunters was Meg Gehron, who piloted Talan to first place over fences. Gehron and Talan made their debut in the division a winning one, stepping up successfully from the 3′ Adult Amateur Hunters.

Gehron trains with Freddie Vazquez of Messenger Hill Farm, and Vazquez rode Talan to the championship in the Green Conformation Hunters earlier in the week.

“He was really balanced and he was responding really well,” Gehron said. “I could leg him up to the jumps and he’d just walk down the lines – he has a huge stride.”

Gehron described Talan as a horse with a lot of personality. “He’s kind of an instigator,” she laughed. “He really likes to poke at things and grab things, and he’ll pretend like he didn’t do it. He has an innocent face. He’s like the kid who eats glue in class. He’s so cute – you can’t get mad at him.”

It is shaping up to be a competitive race for the 3’3″ Amateur Owner Hunter championship, which concludes with three classes on Sunday, the last day of Summer in the Rockies VI. In the 3’6″ Amateur Owners, Sherri Kahn and Walter jumped to an early lead, winning both classes on Saturday.

Kahn and Walter put in a confident first round and then navigated the twists and turns of the handy round with ease.

“Everything flowed well,” Kahn said. “There was one jump where I felt I could have come out of the turn a little bit better. Other than that, he was really good.”

“I thought her riding was very good,” said Frank Kahn, Sherri’s trainer as well as her husband. “She stepped up and made each lead equal. She usually finds the jumps a little better off her right lead, and today she was really good off the left lead.”

Riding and competing is a family affair for the Kahns, who have a farm in Bucyrus, KS. Their daughter, Kara, also had a successful day, winning a class in the Small Junior Hunters with her own Maverick.

“The shows are when we spend the most time together – we make it our vacation – and it’s a lot of fun,” Sherri said. She noted that this is Kara’s last junior year, so mother and daughter will be soon be competing against each other in the amateur owner divisions.

“After the last jump, I was pretty confident,” Kara said after her winning ride. “I didn’t think I would have won, but I felt really good about it. The first time he ever did the juniors was here last summer, so he’s still learning everything, and it’s nice to come full circle.”

“My dad is my trainer, along with Jane Schweiger sometimes,” Kara continued. “It’s really fun because we all work together. It’s fun to watch my mom win and I learn a lot from her. When all of her friends tell me that I ride like her, I just take it as a really big compliment. She’s someone I look up to.”

Kara and Fred will cheer Sherri on as she returns on Sunday to try to continue her winning ways in the 3’6″ Amateur Owner Hunters.

The Small and Large Junior Hunter championships went to the pairs that got off to a strong start on Friday and rode the momentum into Saturday’s competition. Emma Willsky and her own Simply Said, who went three for three on Friday with wins over fences, in the handy and under saddle, picked up another win in the second round on Saturday to emphatically claim the Large Junior Hunter championship over Kai DeVoglaer and Colleen McKenzie’s Castello in the reserve spot. Willsky and Simply Said also won the $1,000 Junior Hunter Classic with the high score of 169.

“Our second round was probably our best round of the week,” Willsky said. “He was a really good boy.”

Willsky, like Hund, trains with Ashley Keeler, who was pleased with Simply Said’s consistent effort during the final week of Summer in the Rockies.

“He’s just been great this week,” Keeler said. “He’s been on top of his game. He came out every class jumping as good as he’s ever jumped and listening as well as he’s ever listened. I’m just thrilled with him.  He was ready to be great in every single class this week and he never faltered. He’s just a fantastic animal.”

She watched Willsky’s partnership with the horse improve over the course of the summer. “They were like clockwork at the end,” she said.

Caitlin Boyle and Finders Keepers added a third win on Saturday to their two from Friday to clinch the championship in the Small Junior Hunters. Amanda Hauser and Calido’s Son improved off their solid efforts on Friday to take a win and a second on Saturday and earn the reserve championship.

“The first round he seemed a little fresh, but after that we were a lot better,” Boyle said. “I was more on it yesterday than I was today, but we still finished up well. The singles were nice and the outside lines had a good forward rhythm to them. Everything flowed nicely.”

Boyle will finish out the Summer in the Rockies circuit with a low junior jumper class on Sunday. Meanwhile, the Amateur Owner Hunter divisions will wrap up in the Olson Family Hunter Arena.