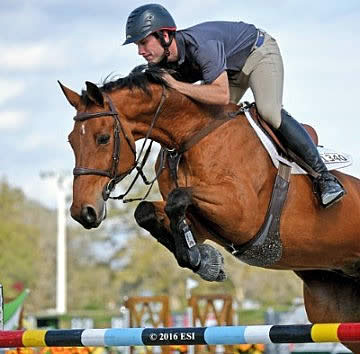 Ocala, FL (February 5, 2016): Jumpers descended on HITS Post Time Farm to compete for a shot at the blue and a piece of the prize purse in the Week III $25,000 SmartPak Grand Prix and the $2,500 Brook Ledge Open Welcome.

Lisa Goldman of Hawthorn Woods, Illinois and her longtime partner Morocco sped to another victory in the $25,000 SmartPak Grand Prix on Thursday. Aaron Vale riding from Williston, Florida and Thinkslikeahorse’s Spirit of Alena was second, and Andrew Kocher from Lake St. Louis, Missouri and Uppie de Lys, owned by BTS Entertainment and Sales, finished in third.

Riders took their turn at the 1.50-meter course set by German course designer Martin Otto. Nine riders jumped clear in the first round, which included three double combinations. In the jump-off, riders rode with a no holds barred attitude, and tried their best to take home the winner’s share of the prize money.

The jump-off started with a triple bar followed by a long gallop to a vertical. It also included a combination across the center of the ring followed by a sharp turn to a bending line, finishing with an oxer just past the In-gate.

First to go in the jump-off was Hunter Holloway of Topeka, Kansas on VDL Bravo S, owned by Hayes Investment Corporation. The grey cleared the fences easily to earn a clear round in 47.015 seconds. Lisa Goldman riding Mary Goldman’s Centurion B was up next, but a rail at the third fence cost her four faults. Her fast time of 45.307 held up for sixth place.

Vale pulled out all the stops on Spirit of Alenaand galloped home to take the lead in 44.269 seconds. Kocher and Uppie de Lys followed in 45.201, which was a full second off the pace to step into second.

Manuel Torres and Christopholini H got into a little trouble and retired taking the eighth-place prize. Brandie Holloway and Lucky Strike, owned by Hays Investment Corporation, delivered a fast clear in 46.184 seconds to take fourth.

Stepping into the ring next, Goldman threw all caution to the winds and trusted her 13 year old partner to do his job. She galloped, turned and angled to the fences, finishing almost a full two seconds faster than Vale in a time of 42.793 to set an unbeatable Great American Time to Beat.

Kocher and Ora del te LLC’s Ora Del Te Di La San Giorgio followed with a rail and a time fault for seventh place and Denise Wilson and Blue Gate Farm LLC’s Catuso chose not to return for the jump off and placed ninth.

Andrew Kocher from Lake St. Louis, Missouri took charge in the $2,500 Brook Ledge Welcome Stake on Wednesday at HITS Post Time Farm in Ocala, Florida. He not only won the class on his Rooney IV, but was also third place with Prof de la Roque, owned by Postagestamp Farm, LLC, and fifth place with his own Le Conte. Aaron Vale of Williston, Florida took second-place honors with Carlo, owned by Amatoville Enterprises. Fourth place was Diamantes Legacy with owner and rider Derek Petersen of Archer, Florida.

Martin Otto of Germany designed the 1.40-meter course. Riders galloped the length of the stadium from fence one to fence two in both the first round and the jump-off with an optional, time-saving inside turn by the gazebo to a combination.

The jump-off finished with another very long gallop to the final oxer. Thirteen of thirty-one entries completed the first round without faults and moved on to an immediate jump-off where seven went clear.

First to move on to the jump-off was Petersen on Diamantes Legacy. They galloped to the second fence, and to the last, and took the inside turn by the gazebo for in a speedy 41.876 seconds. Rooney IV and Kocher were the next to try the jump-off track. Kocher chose to gallop around the gazebo for a longer route but never took back, taking over the lead with a time of 39.933 seconds.

A few trips later, Kocher returned to the ring and was double-clear again, this time on Prof de la Roque. He went around the gazebo again but cut inside the in and out to the last fence. He couldn’t best his own time, putting him in second with a time of 41.097 seconds. Vale and Carlo chose the inside the gazebo route and kept up the pace to knock Kocher out of second place, clocking in at 40.918. Kocher’s final attempt at the win was on Le Conte and he placed fifth with a time of 42.456 seconds.

“This is my first time competing in the Ocala Horse Properties Stadium,” said Kocher. “This is fun – it’s a great ring and my horses are fresh and jumping really well. I tried the turns both ways but it was definitely faster to go around, then just turn and run.”