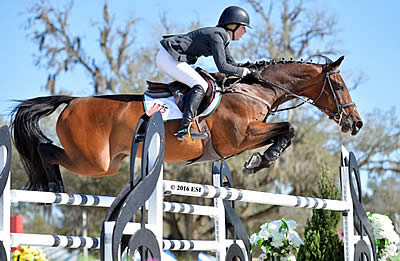 Ocala, FL (March 1, 2016): A big day for jumper exhibitors commenced on Sunday as Week VI of the Ocala Winter Circuit came to a close. Horses and riders battled it out for winning titles and a piece of the prize purses at HITS Post Time Farm.

A plethora of talented starters filled the Order of Go as the crowd descended upon Ocala Horse Properties Stadium to witness who would conquer the course set by Danny Foster of Ontario, Canada and take home the crown in the $50,000 HITS Grand Prix.

The day would belong to Sparr, Florida equestrian, Hayley Waters and Qurint, owned by Chuck and Dana Waters. The 19-year-old dominated the field in all three classes held in Ocala Horse Properties Stadium on Sunday, also winning the $7,500 U-Dump Jr/A-O Jumper Classic and the $5,000 NAL Jr/A-O Jumper Classic.

“Tom has been the best in supporting the Junior/Amateur divisions throughout the year and definitely with the $250,000 Junior/Amateur-Owner Jumper Prix [at the HITS Championship] that she won last year,” said Dana Waters in regard to HITS President and CEO Tom Struzzieri. “The prize money that is offered in the jumper divisions is the reason we moved to Ocala, and we’ve lived here for 20 years. We might even qualify her for the Great American Million this year; you never know what will happen.”

Ten would go clear in the first round to return for the jump-off and six would put in double clear rounds. The first to contend the shortened course was Isabelle LaPierre of Quebec and her own Cesha M. They crossed the timers in a fault-free 44.672 to set the tone for the jump-off.

New Jersey equestrian Amanda Flint, hot off a win in Thursday’s $25,000 SmartPak Grand Prix, and her own VDL Wittinger entered next to challenge the shortened course. They put down a speedy round, taking the tight rollback turn from the mid-course combination to a vertical leading to a gallop across the arena to the last set of fences. They set the Great American Time to Beat as they crossed the markers fault-free in 44.240.

Flint’s lead would be short-lived, however, as Germany’s Andre Thieme, previous winner of two HITS $1 Million Grand Prix, followed with his own Cellisto. They turned tightly through the rollback, and upon landing Theime and the big strided bay kicked it into high gear as they galloped towards the last two fences. They clocked in at 42.046 to take the lead by more than two seconds

Three more trips would go before Thieme’s time would be tested. Waters and Qurint came in next, with their sights set on a trifecta of wins in the Stadium. As cheers poured out from the stands, urging the young, talented rider to the finish, Qurint and Waters blazed through the course. The mare’s ground-covering stride proved helpful as they galloped to the last set of fences, crossing the timers in a fault-free 41.915 and setting the new Great American Time to Beat.

“My plan was to go as fast as I could in the open areas. I got pretty lucky to A of the combination, I was going a little fast, but we made it through,” said Waters. “After the rollback turn, the goal was to go quick in that area to shave off time.”

Ocala’s own Ian Silitch followed Waters with Cordovo. The round would not be enough to take the lead from Waters, as they clocked in clear in 44.647, which would eventually earn them fifth place. Zilano M and Michelle Stopford and Amanda Flint on her second ride, Superbad, also returned to contest the course, but none could beat Waters’ time.

Waters has grown up on the HITS Ocala Winter Circuit, participating in lead-line at the very same venue, making the victory all the more sweet. The up-and-coming equestrian certainly wowed the crowd on Sunday after an impressive three-peat win in Ocala Horse Properties Stadium.

Hayley Waters, riding Galous, a new entry for Chuck and Dana Waters, sped to the win in the $7,500 U-Dump 1.45m Junior/Amateur-Owner Classic on Sunday in HITS Ocala Horse Properties Stadium. Dana Waters was thrilled with the 14-year-old chestnut who was just purchased on Tuesday and is already claiming blue ribbons.

Horses and riders competed over a 15-effort course set at 1.45 meters by Canadian course designer Danny Foster. Eight horses jumped clear in the first round to advance to the jump-off and it was a race to the finish. The course featured a Liverpool, two combinations, tight inside turns and a challenging left turn to a combination previously jumped from the right in round one.

First to go in the jump-off was Niels Kirsten riding Chateaugravin. They finished in a fault-free 51.155 to set the tone for the class. Stepping into the ring next was Caprisio and Caroline McLeese of Omaha, Nebraska. McLeese and the speedy grey took all the inside turns, including a slice inside the Liverpool to fence 13. They crossed the timers in 49.103 to take over the lead.

Waters followed McLeese, to take her turn at the shortened course. Opting for the same route as McLeese, Waters and Galous moved faster across the ground, shaving more than 3 seconds off the leading round to top the leaderboard with a clear, 45.842-second round.

“This is only the third time I’ve jumped him, and I think he was really looking for where he had to go, which kept him sharp even though I got deep to the in and out,” said Waters. “I just stayed on one pace throughout and [Galous] did the rest.”

The next four riders had four faults on the course, including Melissa Rudershausen of Kennett Square, Pennsylvania and her own Ugolin Du Mont. Their time of 46.933 proved to be the fastest of the four faulters and eventually earned them fourth. Fifth place winner Lina Rojas-Restrepo aboard Mauricio Restrepo’s Ramdam De Dry clocked in with four faults in 47.965.

The final horse to jump off was Cafino Z owned by Mauricio Restrepo of Wilmette, Illinois, ridden by Lina Rojas-Restrepo for her second shot at the blue. Cheers rang out from the in-gate as Restrepo galloped the grey to a finish in 48.043 to take second place, securing her two spots in the top five.

The Grand Prix ring at HITS Post Time Farm in Ocala, Florida was the place to be for Sunday’s Adult Amateur riders and their mounts. Canadian course designer Danny Foster designed an intricate course that featured a serpentine pattern and 270 degree turns that tested the skill of each horse and rider.

Ten returned to the jump-off, with four going double clear. A Lotta Moxie, a 19-year-old pony, with former event rider Alli Ellis from Dade City, Florida, topped the class by turning tightly and hugging the corners, clocking in at 46.530 for the blue.

First to return to the ring for the jump-off was Phoebe Beachner of Olathe, Kansas on her own Koraal. Beachner piloted her mount through the shortened course, smoothly executing each rollback turn. They turned in a neat, fault-free round in 50.976 to take the lead.

Next up was Grant Anderson of New Canaan, Connecticut on Skelton W, owned by Silvermine Farm Inc. They galloped through the timers to stop the clock at 52.34, fitting in to xx place by 2 seconds behind Beachner.

Ellis and the seasoned chestnut Pony Jumper “Moxie” jumped next, with their sights set on the victory. They turned like a sports car, shaving four seconds off the leading time as they crossed the timers in 46.530, which would prove to be the time to beat.

Only one additional trip would be double clear. Consistent winner this circuit, Grant Anderson returned on his second jump-off mount, Iczing. They left out a stride in the combination, going wide to recover, and finishing in 47.468 just behind Ellis for second place. Boechner finished third with Koraal and Anderson and Skelton W were fourth.

“I’m so lucky to have this pony and my trainer, Grant Pennington, who has been working with me for the last six weeks,” said a thankful Ellis. “Winning the Classic means the world to me, and it’s a great start to my jumping career. Thanks HITS for putting on such a great show!”