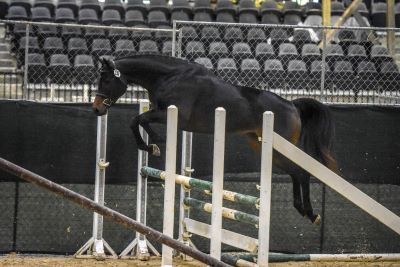 Mill Spring, NC – December 1, 2020 – The 2020 edition of the Nutrena® Young Horse Show Finals presented by Spy Coast Farm welcomed a record 130 entries to Tryon International Equestrian Center and Resort (TIEC) November 5-8, 2020, showcasing the future of American-bred sport horses, ranging from yearlings to five years old. From in-hand and liberty classes to jump-chute, under saddle and over fences competition, the young equine athletes were evaluated over four days in a safe and educational environment intended to support and promote American sport horse breeders across many breeds and disciplines.

Jean Yves Tola, the organizer of the Young Horse Show (YHS) Series, was thrilled with the “largest turn out so far” of the series’ tenth year of competition since inception. Despite a no-spectators mandate due to COVID-19 and strong safety measure in place, the enthusiasm for young sport horses remained unaffected, he reported.

“It was a great way to end our 10-year anniversary season,” he recapped. “The overall quality [of entries] keeps climbing every year, making this competition noteworthy. The live stream addition this year was fantastic too, as it allowed us to reach an audience beyond the United States. We had buyers, breeders, and owners tuning in from around the world. We’re very much looking forward to 2021!”

Sara McCormick of Orchid Hill Farm was a first-time competitor in the YHS Finals, adding the Finals to her competition calendar after a friend’s recommendation. McCormick brought her stallion, “Jimmy” [Orchard Hill’s Finer by Far], who is a third-generation foal for her. She was excited to experience the YHS Series as she’d “never actually done anything like the Young Horse Show.”

“I wanted to bring him out into a different venue than he’s been in before. He actually showed on the line last year for the Young Pony Hunter Breeding in the USEF stuff. Last year, he won Best Young Pony at Devon, and was first at Upperville. I had plans to get him out this year, but because of COVID, Devon and Upperville were cancelled. I decided to bring him home and then bred him to five mares. One of my friends was coming to this, so I said, ‘Okay, let’s take him!’ It’s been a lot of fun. I hope to bring a few more next year and see how it goes. It’s something for the young horses to do, and a new venue for them.”

McCormick noted that being able to connect with her friends and fellow breeders she knows online, but has never met in person, was a highlight for her:

“I loved meeting and seeing so many people who I know on social media, but haven’t put two eyes on. We met a lot of different people who were interested in the stallion and interested in what we’re doing, too. Everyone was really nice. Breeders benefit [from the Young Horse Show] because people get to see horses bred in the U.S. and the quality of the horses bred here in a more European setting. They can really view the animals and their different styles.”