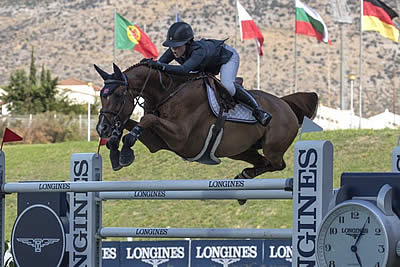 Team Norway stormed to a very significant victory in the Longines FEI Jumping Nations Cup™ of Greece staged at the 2004 Olympic venue of Markopoulo in Athens (GRE). This final of the 2019 Europe Division 2 series saw eight nations battle it out for the single promotional spot on offer for Division 1 next year, while also up for grabs were two qualifying places at the Longines FEI Jumping Nations Cup™ Final 2019 in Barcelona (ESP) next October.

And it was the Norwegian side, consisting of three members of the Gulliksen family along with Hege Tidemandsen, who claimed pole position ahead of Portugal in second while Poland lined up in third.

A move into the super-competitive higher division is a big ask for many of the countries that have a limited pool of horses and riders, so winning Chef d’Equipe, Mikael Kolind, was cautious about his team’s prospects after this great result. “We have the ticket for Division 1 now, so we will see if we will use it!” he said. But there’s no doubt about their forthcoming trip to Spain.

“We are very happy to be able to go to Barcelona and hopefully to qualify a team for the Tokyo Olympics!” said Tidemandsen who produced one of the three double-clears that secured the winning zero scoreline. Portugal will join them at the Spanish fixture, putting just four faults on the board to finish a fence ahead of the Polish side who were foot-perfect second time out but who couldn’t improve on their eight-fault first-round tally to just miss out.

It was wide open right to the end, however, victory depending on a clear round from the last man into the ring, Geir Gulliksen (59), who is better known to his friends as “Jimmy”. His daughter Victoria (27) racked up 16 faults in the first round and eight in the second with the 10-year-old gelding Papa Roach. So although both Tidemandsen and Victoria’s brother, Johan-Sebastian (22) riding Exit of Ice Z, never put a foot wrong, Norway needed to discard those eight faults to stay out in front.

Hungary and Portugal were lying joint-second with a four-fault tally as the second round began over the course designed by Germany’s Christian Wiegand, and when the Portuguese held firm then a fence down from “Jimmy” would force a two-way jump-off, and any more than that could prove extremely expensive. Staying cool and calm, the Olympian, who has been the rock on which Norwegian showjumping has depended for very many years, steered the 13-year-old Gin Chin van het Lindenhof, a horse he took over from Ireland’s Bertram Allen at the end of last year, to a clean run all the way. And the roars from the Kiss and Cry said it all as he galloped through the finish – it was a Norwegian mission accomplished.

“This was just an amazing experience! It’s the first time for me at the Division 2 Final and to go in there and win the whole thing is just super. I’m so proud of what my team-mates and all our horses have achieved today!” — Hege Tidemandsen (Team Norway)

Tidemandsen runs a riding school in Norway along with her mother “a little further north from Gulliksens,” and has been a real self-starter. “I began with ponies and then we always made the horses ourselves because we never had money to buy the good ones; we would only get the horses no-one else wanted and if I was good enough I could improve them. But today I’m very happy because I have a really good horse who jumps his heart out for me,” she pointed out.

She was talking about the 13-year-old Carvis who, however, has been a very difficult character along the way. “He was always jumping too big and scaring himself when he was younger, and I was a bit of a chicken so my sister did all the early work with him. He wasn’t easy,” she explained.

Now he’s a family favourite. “We’ve had him for 10 years and people are always trying to buy him, but my father says we can’t sell a friend!” she said.

She is hoping that she and her friend are on their way to Barcelona where the battle for that last Olympic slot is likely to be hard fought. The final Europe Division 2 standings, based on this result, show Norway and Portugal in first and second places, Poland in third, Hungary in fourth, Greece – represented by a plucky three-member side – in fifth, Spain in sixth, Bulgaria in seventh, and Romania in eighth.