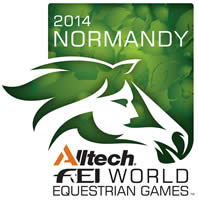 Lausanne (SUI), 31 July 2014 – Riders, drivers, and vaulters representing no less than 74 nations have been nominated to compete in the Alltech FEI World Equestrian Games™ 2014 in Normandy, the FEI’s flagship event, which kicks off in 23 days. The number is an all-time high and represents a 25% increase compared to the nominated entries for any of the previous editions of the FEI World Equestrian Games™.

The nominated entries list, from which the final entries will be selected, is published today and is available on the event’s official website here.

Jumping has attracted the largest number of nations, with 54 countries entered for the competitions at Stade d’Ornano in Caen, closely followed by Endurance. Riders from 48 countries will compete in the Endurance event, which takes place against the spectacular backdrop of UNESCO World Heritage Site Mont Saint-Michel.

The next and final stage in the Games entry process is the deadline for definite entries, which is 14 August for Dressage and Para-Dressage, Eventing, Endurance, and Reining, and 22 August for Jumping, Driving, and Vaulting.