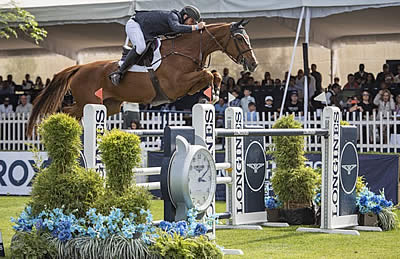 Salvador Onate (MEX) did what no one else could in the Longines FEI Jumping World Cup™ Leon (MEX). He secured a victory aboard Beautiful Red with a single time fault, as no other rider could leave all of the jumps up over Anderson Lima’s (BRA) challenging track.

No jump-off was needed to determine a winner. Onate and his mount finished on a first-round score of 1 and a time of 83.88 seconds, less than a second over the 83-second time allowed. Arturo Parada Vallejo (MEX) was the fastest rider on the day, finishing second with 4 faults in 78.72 seconds. Juan Jose Zendejas Salgado (MEX) finished third with Just Nice van het Indihoff; that duo also had a 4-fault score, but their time was slightly slower (79.40 seconds).

“As soon as I walked the course, I knew there would only be maybe one or two clear rounds. In the ring, I knew I had to take my time and that it would be better for me to take my time and maybe have a time fault, and I had to gamble a bit with that.” — Salvador Onate (MEX)

“There were some pretty amazing riders [behind me], and I thought there would be at least one clear,” he added. “It all worked out in the end.”

Onate had nothing but praise for his mount, who has stepped up while his top horse Big Red is en route to Europe to make a bid for the upcoming Olympic Games in Tokyo (JPN).

“She just rose to the challenge,” he explained. “It was a pretty tough course — very technical. She just jumped her heart out. She did amazing.”

The win held special meaning for Onate, as he both owns and resides on the Leon venue property. A year ago, Onate finished second with Big Red in the same event.

“It’s amazing,” he said. “To win a World Cup anywhere, let alone in my hometown — it’s just amazing. I can’t explain how much it means.”