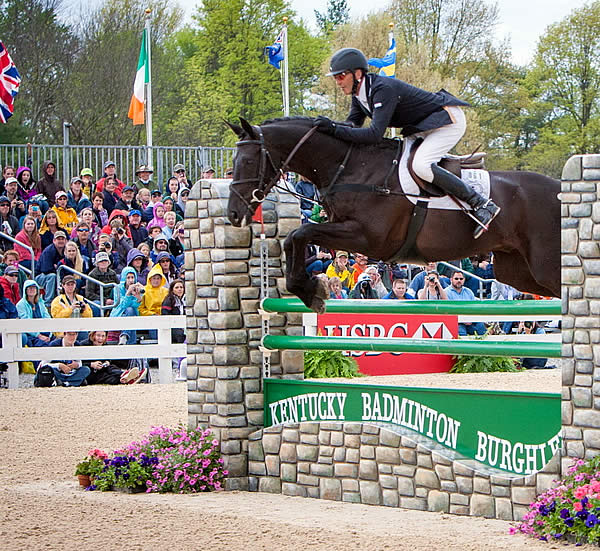 Andrew Nicholson (NZL) rode Quimbo to a clear jumping round for his first-ever win at the Rolex Kentucky Three-Day Event (Anthony Trollope/FEI).

Nicholson has made no secret of the fact that for him this season is “all about the HSBC FEI Classics – if William lets me!” and, at this halfway stage, he now holds a commanding 10-point lead over William Fox-Pitt (GBR), who jumped clear to finish second on Seacookie TSF.

This was Nicholson’s first Rolex watch, the fifth CCI4* win of his 30-year career, and the third on the trot, following victories last year at Burghley and Pau.

Most significantly, it sets up an enthralling head-to-head with Fox-Pitt in the Rolex Grand Slam this weekend at the Mitsubishi Motors Badminton Horse Trials (GBR) on 3-6 May.

He put his current run of success down to: “The realisation about the sort of quality of horses you need nowadays and great team work at home. When it dawns on you that you’ve won a four-star competition on a young horse, it’s a great buzz, and this is no ordinary four-star.”

He said of Quimbo: “He’s a proper horse! He is exceptional and smart and very easy to ride. A win like this is great for the future. Nereo [Olympic bronze medallist] is my best horse at the moment because he’s a hardened campaigner, and Quimbo is the new kid on the block, but I can see him nudging Nereo aside.”

Buck Davidson (USA), who finished best of the home side in fourth place on Ballynoe Castle RM, hit two rails, giving Nicholson a comfortable two-fence margin over Fox-Pitt. This meant that Nicholson, who was helped in the warm-up by the former Spanish rider Luis Alvarez Cervera, could take his time and afford three time penalties on the smooth-jumping Quimbo. He also finished third on Calico Joe, dropping one place when, as he had predicted, the Irish Thoroughbred knocked three fences.

Nicholson has produced Quimbo since a youngster. The 10-year-old gelding, bred in Spain by Anna Beca, is by Lacros, a son of the top jumping sire Landgraaf. Nicholson has long favoured horses bred in Spain on Jumping lines. The mare Qwanza, bred on similar lines, was seventh at Kentucky last year, and Nereo, which he will ride at Badminton next weekend, was bred by Anna Beca’s brother Ramon.

Lynn Symansky (USA), who was competing with a broken finger, scored her best international result with a meteoric rise from 25th place after dressage to eventual fifth on her 10-year-old Thoroughbred gelding Donner, ahead of Will Faudree (USA) and Pawlow, sixth.

Canadian Olympian Hawley Bennett and the veteran Gin & Juice, world silver medallists in 2010, rose from 29th place to eventual seventh after adding just 0.4 in Cross Country time penalties to a Dressage score of 59.8.

Buck Davidson was ninth on Mar de Amor, and gained a bonus prize with the two-year lease on a Land Rover due to being the American rider nearest the optimum Cross Country time. Davidson admitted he was a little disappointed with his two rails down in the jumping phase on “Reggie”, but he said: “My little horse was great. This is my third national championship here [as highest-placed US rider], all on three different horses. Maybe we can keep these New Zealanders and Brits away and I’ll win here one of these days. But all my three horses are in great shape, and that’s exciting for me for the future.”

Peter Atkins (AUS) moved up to 10th place on Henry Jota Hampton, one of the most popular horses on the US circuit. The most significant changes to the final order were Kiwi rider Jonelle Richards’ departure from seventh place when The Deputy incurred 20 penalties, and the elimination of California-based British rider James Alliston’s Tivoli, ninth overnight, at the final horse inspection.

Meghan O’Donoghue (USA), a member of the USA’s under-25 training squad, made a brilliant CCI4* début to win the HSBC Training Bursary worth $1,000.

She only rode in her first CCI3* last year, finishing 12th at Fairhill (USA) on Pirate, a horse she has produced from a youngster since she spotted him as a three-year-old on the racetrack, where he was being used to ‘pony’ racehorses to the start. O’Donoghue previously worked as barn manager and assistant trainer to Jan Byyny, and is now based in Illinois.

Andrew Nicholson (NZL), 51, leader of the HSBC Rankings and the HSBC FEI Classics series, is acknowledged as one of the most hard-working and naturally talented horsemen in Eventing. He first came to England as a 19-year-old in 1979 and worked with racehorses. His first CCI4* was Badminton in 1984 where he earned a place on the first New Zealand Olympic team, at Los Angeles. He went on to ride at five more Olympics, winning team silver in 1992 and team bronzes in 1996 and 2012, when he finished fourth individually on Nereo. He also won team gold at the 1990 FEI World Equestrian Games in Stockholm (SWE), and team and individual bronze on Nereo at the 2010 Alltech FEI World Equestrian Games in Kentucky (USA).