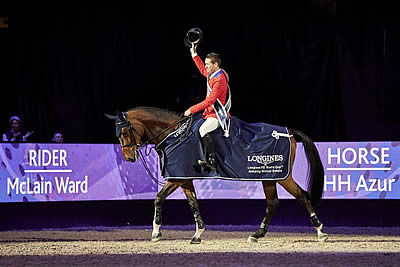 “It is always a great honour to be number one. It reflects the consistency at the top level that we all strive for. Being named number one in the Longines Rankings immediately after my World Cup win is just a great feeling!” — McLain Ward

Ward and his 2016 Olympic mount HH Azur clinched victory at the Longines FEI World Cup™ Finals in Omaha (USA) last Sunday, bringing the 2016/17 season to a fairytale close and boosting Ward up from fourth to the number one spot in the Longines Rankings.

He replaces Germany’s Daniel Deusser, who has held pole position since January and now drops back to third. Fellow US Olympic teammate, Kent Farrington, remains in second, with Christian Ahlmann (GER) dropping from third to fourth and Eric Lamaze (CAN) holding onto fifth place.

Ward made his Olympic debut at Athens 2004 when he was a member of the US gold medal-winning team. He earned a second Olympic team gold at the Beijing 2008 Games, and finished sixth individually at London 2012. Ward also won individual gold and team bronze at the Toronto 2015 Pan American Games with Rothchild.

Despite announcing his retirement in April 2016, two months later Ward took over as world number one from French Olympian, Simon Delestre. Heading into the Rio Olympic Games in incredible form, Ward and HH Azur were foot-perfect throughout to help the US to team silver.