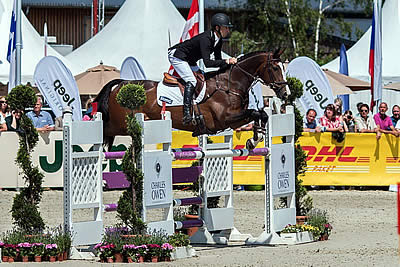 New Zealand’s Tim Price and Wesko finished on their Dressage score to claim the honours at the German CCI4* at Luhmühlen (GER), presented by DHL Paket, the fifth leg of the FEI Classics™ series. Photo: www.eventingphoto.com/FEI.

Lausanne (SUI), 14 June 2014 – New Zealand rider Tim Price is enjoying a purple patch of form and he produced an outstanding display of Jumping to win his first CCI4*, at Luhmühlen (GER), presented by DHL Paket, the fifth and penultimate leg of the FEI Classics™ 2013/2014.

Riding the Wesko Syndicate’s Wesko, an 11-year-old Dutch-bred gelding by Karandasj, Price was the only competitor to finish on his Dressage score, of 43.8, in a thrillingly tight finale.

The Cross Country leader, Michael Jung (GER), looked the picture of concentration as he had fischerRocana FST jumping on springs, but a groan from the crowd signalled that a pole had fallen – the first part of the double at 12a – and that it was not to be a German victory.

Price was evidently thrilled to win, but he was quick to acknowledge the host nation in a gracious acceptance speech, in which he dedicated his victory to the young German rider Benjamin Winter (GER), who died as the result of a fall on the Cross Country yesterday.

“I would like to dedicate this win to Benjamin. It was a very sad day yesterday,” he said. “And I’d like to thank the organisers at Luhmühlen for making us all so welcome. I first came here as a visitor eight years ago and I’ve been waiting ever since to ride here.”

Instead of a lap of honour, the leading riders, all wearing black armbands in honour of Winter, were escorted quietly from the arena.

Boyd Martin (USA) proved to the American selectors that he is fully recovered after breaking his leg in the spring by finishing in with third place on new ride Shamwari 4 and 15th on Otis Barbotière.

Martin picked up just one time penalty to rise four places from seventh on Shamwari 4. This exciting prospect was bought from Swedish rider Ludwig Svennerstal by a syndicate during the winter, but this was Martin’s first opportunity to try out the horse at an international competition.

Oliver Townend (GBR) hit fence 10 on the 13-year-old Black Tie, but he remained in fourth place and left the ring with a broad smile on his face.

Indeed Townend has plenty to smile about: this was the second time this year that he has been the highest-placed British rider at a CCI4*, having finished as runner-up at Badminton on Armada. As a result, he has now leapt into second place in the FEI Classics™, just 10 points behind William Fox-Pitt (GBR), which means that the series will go right to the wire at Burghley in September.

Elaine Pen (NED) must be delighted with her first CCI4* performance. She rose three places to fifth on her former Young Rider horse Vira with just one rail down.

A four-fault round was good enough to move Andreas Ostholt (GER) and So Is Et up five places to sixth, while the USA’s Phillip Dutton (Mighty Nice, seventh), Germany’s Bettina Hoy (Designer 10, eighth) and Australia’s Bill Levett (Improvise, ninth) all dropped down the order with three rails down each.

Tim Price found Wesko “by chance at the end of a long, cold day” in a Jumping yard where he was being competed by British rider Siobhan Edmonds. The white-faced bay gelding proved “flawless” in his early Eventing competitions and went on to win twice at three-star level, at Blair Castle (GBR) CCI3* last year and at Tattersalls (IRE) CIC3* a fortnight ago. The pair contested Badminton, but took an early ducking in the Lake.

“I’m thrilled for my horse. This is his first four-star completion, and my first visit here, and I certainly didn’t expect to be standing here as the winner,” he said.

New Zealand has provided the winners of eight CCI4*s since Sir Mark Todd set the ball rolling at Badminton in 2011. Now this tiny country with such a huge legacy of horsemanship has another hero to salute.

Tim Price, 32, grew up on a farm near Canterbury in New Zealand’s South Island and began his riding career in Jumping, up to FEI World Cup™ level, before deciding that most of his horses were better suited to Eventing.

He paid for his first trip to the UK by selling a good horse, Vortex; they were later reunited and competed at CCI4* level together, finishing 20th at both Badminton and Pau in 2009.

This year he was ninth at Badminton on Ringwood Sky Boy and a member of the winning New Zealand team in the FEI Nations Cup™ at Houghton (GBR).

He is now based in Wiltshire in the UK with his wife Jonelle (nee Richards), another South Islander, and a yard full of horses; Jonelle was a member of New Zealand’s bronze medal team at the London 2012 Olympic Games and finished 12th (Classic Moet) and 16th (The Deputy) at Luhmühlen.