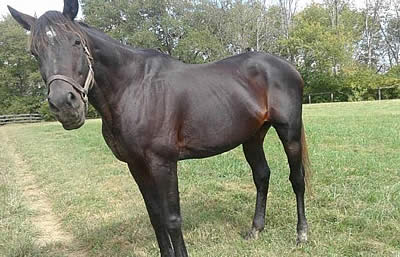 GEORGETOWN, KY – JULY 13, 2018 – Say Florida Sandy, a multiple graded stakes winner and one of the greatest New York-breds of all time, has died.

The 24-year-old stallion, who was retired with Old Friends, the Thoroughbred Retirement Farm in Georgetown, KY, passed from an apparent heart attack on July 11, but a full necropsy is pending.

Michael Blowen, founder and president of Old Friends, made the announcement.

Bred by Sanford Bacon, the son of Personal Flag out of the Sweet Candy mare Lolli Lucka Lolli was a star of the New York racing circuit for much of his seven-year career. He won several New York-bred championships, including three New York Champion Sprinter titles and New York Horse of the Year honors for 2001.

Raced by Bacon before being lost for $70,000 in a claiming race in 1997, Sandy had several owners and conditioners, but won the lion’s share of his races for trainer Juan Serey and owner John Rotella.

Say Florida Sandy entered stud in 2004 at Buckridge Farm in Kinderhook, N.Y. where he stood for 10 years. As a sire he is best represented by stakes winner Say Toba Sandy, who won the Finger Lakes Juvenile Fillies Stakes in 2007.

Say Florida Sandy was pensioned by his syndicate and retired to Old Friends in 2014.

“It’s been a privilege to retire one of the top New York-breds of all time,” said Old Friends’s Blowen. “Sandy was a very sensitive stallion, so he was placed at Hurstland Farm in Midway, KY under the watchful eye of owner Alfred Nuckols, who took the greatest care of him,” Blowen added.

“We are grateful to breeder Sanford Bacon and to Walter Downey, who managed Sandy’s syndicate, for allowing us to care for their champion.”