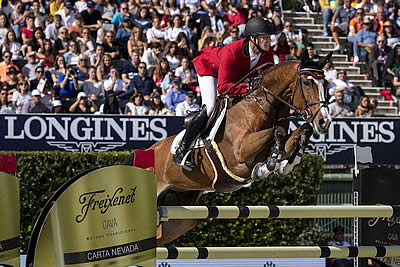 Deeridge Farm in Wellington (USA) is already buzzing with anticipation ahead of the first major team clash of the year when the Longines FEI Jumping Nations Cup™ 2019 series gets underway at the charming Florida venue Sunday (17 February). And the host nation is putting down a marker right away, calling up three of the four riders who claimed the team Jumping title in that unforgettable finale at the FEI World Equestrian Games™ 2018 in Tryon (USA) last September.

Wellington stages the first of the three legs in the North America, Central America, and Caribbean League that will continue at Coapexpan (MEX) and Langley (CAN) in May. A total of six countries – Canada, Colombia, Ireland, Israel, Mexico, and USA – will line out this weekend, but only Canada, Mexico, and USA will be eligible for points in this regional leg towards qualification for the prestigious Longines FEI Jumping Nations Cup™ 2019 Final in Barcelona (ESP) in October.

So the rest will have to put in a super-human effort to keep them in check, with Canada fielding a side that includes Tiffany Foster and the on-form Mario Deslauriers, and Colombia naming Ilan Bluman and the experienced Teran Tafur in their selection.

At just 21 years of age, Cormac Hanley will be making his Senior Nations Cup debut on the strong Irish team, while Eugenia Garza Perez and Enrique Gonzalez will lend plenty of weight to the Mexican challenge. The most colourful side of all, however, is likely to be the Israeli team that includes the effervescent Danielle Goldstein who set the arena alight every time she appeared at the WEG in Tryon and who finished joint-third on that super-tough last day of competition, and 20th overall in the final individual rankings, with her brilliant mare, Lizziemary.

Wellington will be swiftly followed by the single Longines FEI Jumping Nations Cup™ 2019 qualifier for the Middle East region in Abu Dhabi (UAE) on Saturday 23 February from which two teams will earn a place at the Final, while the seven-leg Europe Division 1 series will get underway at La Baule (FRA) on Friday 17 May.

Team Austria has been promoted to Division 1 after winning last year’s Division 2 Final staged in Budapest (HUN) and so joins France, Germany, Great Britain, Ireland, Italy, Netherlands, Sweden, Switzerland, and the 2018 champions from Belgium in this tough 10-nation contest. The top seven teams will make the cut to the series decider in October, but there’s even more hanging in the balance with the last remaining Olympic qualifying spot also on offer. It’s bound to be a mightier battle than ever in Barcelona this year.