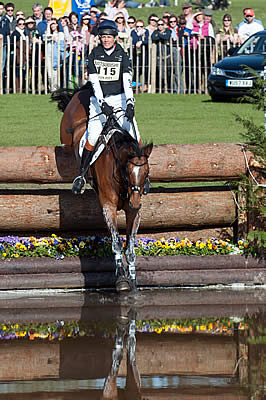 Lausanne (SUI), 22 October 2014 – An elite group of riders have gathered in south-west France for Les Etoiles de Pau (FRA), the start of the FEI Classics™ 2014/2015. The premier French event is the first of the popular series that links the world’s six CCI4*s.

World number one William Fox-Pitt (GBR), who won the FEI Classics™ 2013/2014 with victories at Pau and Kentucky (USA) last year, is bidding to stamp his authority on the new season. He has entered two former CCI4* winners: Parklane Hawk (Burghley 2011 and Kentucky 2012) and Seacookie, the horse he rode to victory in Pau 12 months ago.

Andreas Dibowski (GER) is another former winner of the French four-star, in 2010 on another mare, FRH Fantasia. This time he rides FRH Butts Avedon, an 11-year-old gelding that finished ninth at Luhmühlen (GER) last year.

Dibowski’s compatriot Ingrid Klimke, a member of the all-conquering German team at the last four senior championships, has another CCI4* horse in the making in Horseware Hale Bob, a 10-year-old Oldenburger gelding which completed Luhmühlen this year.

From the home side, France’s Pascal Leroy will be a force to be reckoned with on the seasoned Minos de Petra, fifth at Badminton (GBR) earlier this year.

And there is a strong British contingent. Louise Harwood (GBR) has been having a good season with Whitson, on which she was second at Tattersalls CCI3* and third at Blair Castle CCI3* this year, and Francis Whittington (GBR), fresh from celebrating his first CCI3* win, at Blenheim, rides West Side at Pau.

These two will be joined by the very experienced Pippa Funnell on the magnificent chestnut Redesigned, on which she was unlucky to be unseated at Badminton when challenging for a place, and Mirage d’Elle. Nicola Wilson, who went so well across country at the Alltech FEI World Equestrian Games™ on CCI4* first-timer One Two Many will also challenge in Pau.

The Dressage phase of the first leg of the popular FEI Classics™ series starts tomorrow at 14.00 CEST, with Cross Country on Saturday from 14.00 CEST and Jumping on Sunday from 14.30.

Follow live results from Pau on www.event-pau.fr and watch the entire event live on FEI TV.