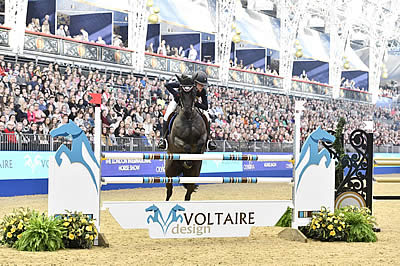 British Showjumping and HPower Group are pleased to confirm an exciting new format for the 2019 Voltaire Design Under 25 British Championship at Olympia, The London International Horse Show.

Twenty-four riders will be invited to compete in the Voltaire Design Under 25 British Championship Qualifier, scheduled to run during the morning session on Friday 20 December at 10.35am. The two-round class will have a start height of 1.40m, the second of which will be a thrilling competition held against the clock.

The top 10 from this qualifier will then advance to the Voltaire Design Under 25 British Championship which will run during the evening performance on Sunday 22 December at approximately 6.00pm. Faults will not be carried through from Friday, so each rider will start on a score of zero and riders will be jumping for the lion’s share of the £13,000 prize pot on offer. With a start height of 1.45m, the class will again run over two rounds with the top five progressing through to the jump off.

The qualification criteria for the twenty-four riders who will be invited to compete in the 2019 Championship are as follows:

Any riders who have qualified via points 1, 2, 3, and 5 and are unable to accept their place on a Grade A or Grade B horse, alongside any combinations from point 4 who have not jumped for four faults or less in the first round, will be substituted with riders in order from the September 2019 FEI Jumping Under 25 Ranking List.

* If there are more than five riders, the riders with the best results in the Nations Cup would take priority as decided by the Performance Manager dependent on the conditions of the respective Nations Cup