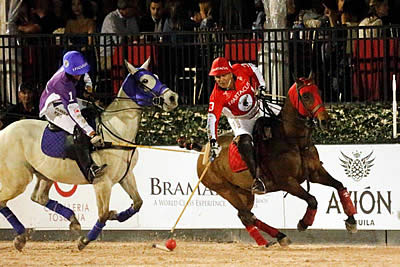 “As a major economic driver during the Winter Season and the benefit of having our own ‘Super Bowl’ of Equestrian Sports annually in the County, we are proud sponsors of the newest addition, ‘Gladiator Polo,’ along with our continued support of the Winter Equestrian Festival and International Polo,” he added.

Gladiator Polo is an extreme sport derivative of arena polo created by Bellissimo, in which six mounted players (three on each team) go flat-out to score the most points by hitting a ball through the goalposts. While similar to outdoor grass polo, Gladiator Polo is played in an arena with high quality footing that enables faster play and compares more to “Hockey on Horseback”. The smaller field and stadium seating give spectators an up-close-and-personal view of the fast paced action.

NBC Sports Network will broadcast round three of the 7-game high-goal Gladiator Polo series, which took place February 23 at the “Coliseum,” otherwise known as Equestrian Village, in Wellington. The $33,500 contest pitted two undefeated powerhouse teams, Spiculus and Spartacus, against each other. All pros, the players included two of the top polo players in the world: Tommy Biddle (who holds an arena rating of 10 goals) and Sebastian Merlos (9 goals).