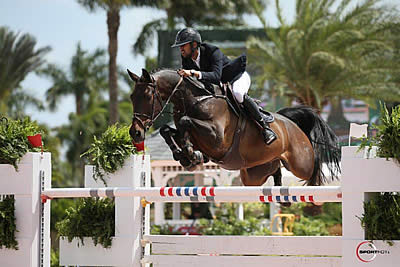 Egypt’s Nayel Nassar rode Lucifer V, owned by Evergate Stables LLC, to the win in the $134,000 Equinimity WEF Challenge Cup Round 12 CSI 5* on Thursday, March 28, during the final week of the Winter Equestrian Festival (WEF) in Wellington, FL.

On Thursday, 60 entries contested the WEF Challenge Cup course set by Guilherme Jorge of Brazil, and of those starters, 28 qualified for the jump-off round, with 18 ultimately electing to return to face off over the short course.

Nassar was the second to return for the jump-off and set the time to beat at an untouchable 35.90 seconds.

While only having made his debut into the show ring at the beginning of March, Greg Crolick’s new partner, Braavos, has already made a name for himself. The six-year-old Warmblood gelding (Rock Forever I x Scarlett) was named champion in the Triple Crown Nutrition Green Hunter 3’ division. The championship is one of two division victories the gelding has earned during the final few weeks of the 2019 Winter Equestrian Festival.

Crolick and the gelding owned by Renaud Farm, LLC first debuted their partnership in the show ring during Week 9. Braavos showed his potential promise early on as he secured the champion ribbon for the USHJA Hunter 2’6” division during his first show on U.S. soil. The gelding once again glided to success during Week 12 as the pair picked up two firsts, two seconds, and a third in the five classes to end the division on 36 points.