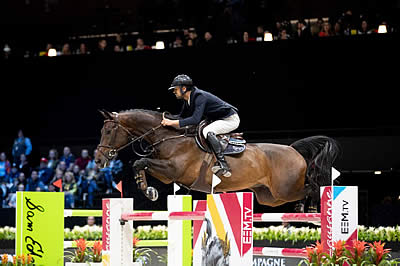 New York, NY – Nayel Nassar of Egypt treated the crowd to a fabulous finish in the $400,000 Longines Grand Prix of New York, the grand finale of the Longines Masters of New York, on Sunday, April 28, at NYCB LIVE.

German course designing mastermind, Frank Rothenberger, created a difficult test for the 29 horse and rider combinations brave enough to accept the challenge, knowing 12 of them would be lucky enough to move on to the second round. Six riders representing six different nations managed to jump clear over the tough track and were joined by the six riders who had posted the fastest four-fault rounds for an all-deciding final.

Going in reverse order of standing and carrying faults forward from the first round, the tension mounted as the double clear performances began to present themselves. Captain Brian Cournane of Ireland was the first to jump double clear with Dino but his conservative time of 45.88 seconds left the door wide open for the riders who followed. Israel’s Daniel Bluman received a huge cheer from the crowd when he jumped clear in a time of 41.95 seconds with Landriano Z, putting him in fourth in the final standings.

Olivier Philippaerts, 25, of Belgium was one second faster in 40.93 seconds riding H&M Cue Channa 42 and looked unbeatable but, as the saying goes, it’s not over until it’s over.

Dutch show jumping sensation Harrie Smolders, currently ranked number four in the world, did the seemingly impossible by leaving all the rails in place and racing home in a time of 39.46 seconds to move to the top of the leaderboard, riding Une de l’Othain, an 11-year-old Selle Francais mare owned by his student, Jennifer Gates, and her Evergate Stables LLC.

In a breathtaking performance, Nassar’s partnership with the 13-year-old Westphalian gelding, also owned by Evergate Stables LLC, was on full display as they cleared hurdle after hurdle with the greatest of ease, and in a deceptively fast time. When they galloped home through the timers in 38.59 seconds, the crowd erupted. New York had its winner!

Not only was Nassar the first rider to ever win both the Longines Speed Challenge and the Longines Grand Prix at the same event, he was the first to do it with the same horse.

“It’s unexpected, really! It means the world. Thank you, Christophe [Ameeuw], for providing us with this platform. We can’t showcase what we do without a platform to do it on and I’m really grateful. I’ve always loved these shows and hopefully I can keep making it a target of mine.” ~ Nayel Nassar