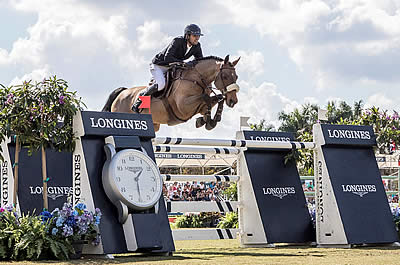 The USA’s Laura Kraut finished in a close second aboard Zeremonie, while Spain’s Sergio Alvarez Moya and Arrayan slotted into the third position. With the win in Wellington, Nassar overtook Mexico’s Enrique Gonzalez in the Western Sub-League standings, earning the young, Egyptian rider an advantageous qualifying position for the Longines FEI World Cup™ Jumping Final in March.

“I thought the first round was quite big when I walked it,” Nassar said. “I was going to fit in extra strides throughout the course but I watched Lauren [Hough] go before me on a small horse [like Lordan] and they cruised right up there so I quickly changed my plan at the in gate.”

From a starting number of 40 entries, only a quarter of the field went clear in the first round over a challenging course built by Ireland’s Alan Wade. “I try to build something fair for the whole field,” Wade said at the close of the first round. He then predicted that a tight rollback in the jump off would be a deciding factor in separating the winner from the pack.

In the jump off, Nassar entered the outdoor turf field eighth in the final order, after watching Alvarez Moya deliver a solid double clear to knock USA’s Adrienne Sternlicht from the lead position. “I knew I had to make up time from [fence no.] 1 to 2,” said Nassar, who went on to boldly angle the latter, a large oxer off a bending line.

Crowd favourites and Olympians stacked the opening order, including Beezie Madden (USA), Ben Maher (GBR), Meredith Michaels-Beerbaum (GER), and Ian Millar (CAN). But the large, technical course forced rails to drop from these top names. And in the case of Michaels-Beerbaum, a crash through the final oxer – in a round that would have, otherwise, been clear – forced her elimination when she fell off Comanche.

“I actually think Lordan’s better indoors – he’s a little horse with a lot of impulsion,” said Nassar in regards to how his horse will handle the ring at this year’s World Cup™ Final. “Big jumps out of a corner aren’t an issue for him, and I heard that the Omaha ring isn’t too small, either. He really grows under the lights and will rise to the occasion.”

Alan Wade (Course Designer): “I thought it was great sport this afternoon. At the start of the week we had a lot of athletes here so we had to cut from 100 down to 40 for today. The materials and the ground that I had to work with allowed me to [build for] five-star combinations here. Today, we saw thrills and spills, we saw excitement, and saw the skill of athletes and top horses. That’s why I love show jumping so much.”

Nayel Nassar (1st): “Lordan is just hitting his stride. I’ve always wanted to come back out here [to Florida]; I just needed a proper horse. I thought a couple of my sales horses were better suited for out here, so it made sense for the string that I have to be here. Also, there aren’t enough FEI events in California and I’m getting back up in the ranking list.

“Honestly, it doesn’t get much better than this. I didn’t expect this. It’s his first show of the year. He’s such an incredible trier, and I know him like the back of my hand at this point. We jumped clear in the first round; we were just going to give it a go in the jump off. I was lucky enough to watch Sergio go right before me and I knew what we had to do and I just let it rip and he answered the questions.”

“In 2015, [Lordan] didn’t jump any classes [due to injury]. Honestly, it gives you a new sense of appreciation. I’m just happy to go in the ring with him now, whereas before, I just wanted to win with big ambitions. It just put things into perspective. He’s such an incredible partner and I’ve known him for so long, now I just feel blessed any time I get to go in the ring.”

Sergio Alvarez Moya (3rd): “It was a fantastic show. My first time for me here. A pleasure for me to do so well. I give everybody thumbs up and hope we can ride here more often.”