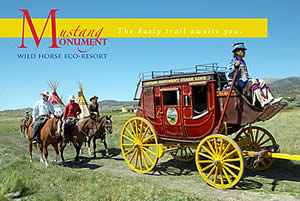 Black Mesa, AZ (September 16, 2013) – The Nohooká Dine’, Elders and Medicine People of the Dine’, unanimously approved a Resolution opposing any and all action that leads to the slaughter of horses. The Horse is sacred to the Dine’ and is a central part of our culture and tradition. The Resolution, approved on August 26th, states in part that “The Great Horse Nation is a part of the Great Covenant. As a supernatural being, it possesses incredible power. It is inextricably tied to our spiritual way of life and our cultural traditions. When our children are born our families look to the horse spirit to see what they have delivered to us. If we fail to honor the place of the horse in our spiritual way of life and in our cultural traditions, then we jeopardize the very cycle that renews the life of our people. The Horse must be given respect and honored for their sacred place within the Creation, as they possess the same fundamental right to Life as we, Five Finger Ones, do.”

This past week, a spokesman for the Navajo Nation administration affirmed this position. During an interview on the radio program Native American Calling, Communication Director Erny Zah stated that: “Slaughtering is not a solution. As the Navajo Nation we are against slaughtering of these horses.”(Airdate – Thursday, September 12, 2013.)

“This statement from the Navajo Nation administration is more aligned with who we are as Dine’ people,” stated Leland Grass of the Dine’ for Wild Horses. “We urge the Navajo Nation to formally adopt a moratorium on horse slaughtering and to only legally contract with horse buyers that agree not to sell horses for slaughter or not to slaughter the horses themselves.” The people of the Navajo Nation were encouraged by Zah’s statement. There has been great concern over past comments that have been made by Navajo Nation President, Ben Shelly. He once voiced concern that the horses were causing environmental damage. These claims appear to have been based on misinformation. We are encouraged to see a shift toward conscientious resource management. The amount of money that is currently being spent to round up the wild horses for slaughter is capable of feeding and watering those animals for years. Grass believes that the Navajo Nation “could use these animals to teach our children;, we can care for them; we can sell them to people and organizations that don’t want to torture them.”

“We are sending the Resolution to all legislators in Washington, DC to show our support for the Horse and to urge them to pass the Safeguard American Food Exports (SAFE) Act, currently pending before Congress,” said Grass. “While it is important for protecting the Horse within the Navajo Nation, a national bill is critical to ensure there is no incentive for horses to be taken from our lands or elsewhere in the United States for slaughter.”