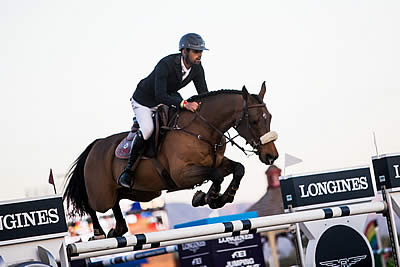 For the second year in a row — and third overall — Nayel Nassar (EGY) and his indelible mount Lordan led the victory gallop in the $100,000 Longines FEI Jumping World Cup™ Thermal (USA).

Besting a jump-off field of five, Nassar and his 14-year-old Hanoverian gelding crossed the timers of Marina Azevedo’s (BRA) shortened course in 43.89 seconds. The duo narrowly edged Eve Jobs, who recorded the best World Cup finish of her career with her own Venue d’Fees des Hazalles; their time was 43.97 seconds. Lisa Carlsen (CAN) finished third aboard Parette after recording the winning time but pulling the rail at the final fence.

“I’m just thrilled with my horse and thrilled to be sitting here again!” — Nayel Nassar (EGY)

Nassar has been partnered with Lordan for more than seven years. In addition to winning last year’s event, the pair also topped the class in 2016. Nassar used his longtime partnership to his advantage, creating his own jump-off plan based off his horse’s quick, yet smaller, stride.

“I tried not to focus too much on what the other riders were doing,” Nassar said. “I know that Lordan is a very different kind of horse with a different kind of stride. I just wanted to know whether my jump-off pace was going to be fast enough or if I needed to take any extra risks.”

The pace proved to be just enough, resulting in a close, eight-hundredths of a second margin of victory.

“It ended up being a lot closer than I expected,” Nassar said, “but luckily we were on the right side of that today.”

Should Jobs qualify to compete at Gothenburg (SWE) in April, it would be her first appearance in a World Cup Final.

“If everything goes as planned, and I can continue to feel comfortable competing at such a high level, I would be honored to go,” she said. “I’m very excited.”

Richard Spooner (USA), a 15-time World Cup Finals veteran, including last season, moved into second in the standings after finishing fourth in Thermal. He has 36 points, four ahead of Zazou Hoffman (USA), who won the World Cup qualifier at Del Mar (USA) in October.