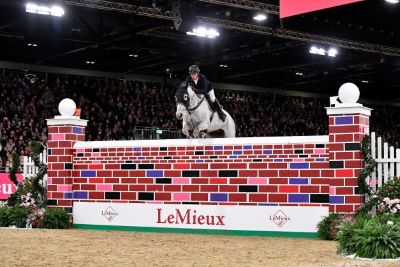 Charlotte Dujardin started the 2021 edition of The London International Horse Show in style, with victory in the FEI Dressage World Cup Grand Prix aboard her Olympic double bronze medal-winning ride, Gio. The Afternoon Performance saw an increase in pace, with the Extreme Driving supported by Karen and Hugh Scott-Barrett won by Jerome Voutaz, and the first CSI5* Show Jumping competition of the Show – The Santa Stakes – which saw World No. 4 Martin Fuchs take the spoils.

The famous Puissance wall took centre stage at ExCeL London for the Evening Performance, with Guy Williams jumping 2.10m to win. There was a second victory for Fuchs in The Christmas Pudding Stakes. In addition to the return of annual favourites The Shetland Pony Grand National and the Kennel Club Dog Agility, there were performances by The Musical Ride of the Household Cavalry Mounted Regiment, horse whisperer Santi Serra, and the presentation of the Raymond Brooks-Ward Memorial Trophy to talented young rider Lottie Fry.

Great Britain’s Gareth Hughes took an early lead in the FEI Dressage World Cup Grand Prix, scoring 69.605 in the new shortened test. Compatriot Richard Davison was the first to surpass the 70% mark, scoring 71.526% aboard his 15-year-old homebred gelding Bubblingh. However, his lead was short-lived, as he was followed into the arena by Britain’s joint most decorated female Olympian, Charlotte Dujardin. Dujardin, riding her 2020 Tokyo Olympic mount, Gio, set the arena alight, trending at over 80% for much of the test and setting a new personal best score of 82.553%.

Dujardin’s Tokyo Olympic teammate, Lottie Fry, riding her 2019 European Championship partner, was the next to pose a challenge. However, a score of 74.52% – which went into second place at the time – was only good enough for eventual fourth in such hot competition. The final two to go, Nanna Skodborg Merrald from Denmark and Frederic Wandres from Germany, came closest to Dujardin’s outstanding mark to finish third and second, respectively.

“I was absolutely over the moon with Gio today,” said Dujardin. “This is his first indoor show; he has only really done the Olympics and Europeans this year, so he had to up his game very quickly to go into that huge indoor arena. He took it in his stride; he went out there and did the test. I didn’t feel like I had to hold his hand through it at all. He really delivered, which made me unbelievably happy. “

The CSI5* Show Jumping got underway with The Santa Stakes, a 1.50m jump-off class, which was won by World No. 4, Martin Fuchs from Switzerland, riding The Sinner. The combination picked up where they left off at the Show, returning to London following their win in the FEI Jumping World Cup in 2019.

12 combinations made it through with a clear first round, setting up for a scintillating jump-off against the clock, and in the end just 0.11 seconds separated the top three. Germany’s Christian Ahlmann took an early lead, setting an impressive target for those who followed; however, Fuchs, full of confidence following victory in the Grand Prix at CHI Geneva last weekend, put on a masterful display to take the lead at the midway point. With just three remaining, Max Kühner gave his all to put Fuchs’ lead in jeopardy, but his time of 32.93 was 0.09 seconds slower, going into second place, with Ahlmann in eventual third.

Fuchs commented: “This is a perfect start to the London International Horse Show with a win in the big class. The Sinner loves to come to London and really enjoys this Show; when he went in the ring, I could feel he wanted to do his best and he loves performing here, and so do I!”

Fuchs’ winning streak continued as he made it two from two on the opening day of the Show with victory in The Christmas Pudding Speed Stakes. Drawn fourth of 34 starters, Fuchs laid down the gauntlet, making all the turns and keeping his foot on the gas throughout to post a time to beat of 53.34 seconds. Those who followed were unable to match his pace and accuracy. Great Britain’s Guy Williams, notorious for his speed against the clock, put in a valiant effort to post a time of 54.82, finishing fourth, and France’s Olivier Robert also came close with a time of 54.48. Last to go, Britain’s Tokyo 2020 Olympic Champion Ben Maher had the sell-out crowd on their feet with an explosive gallop to the last, but despite his best efforts, he could only go into second.

Speaking after the class, Fuchs said: “I knew my horse would be very fast, so I thought I would give it go and try to put as much pressure on the rest of riders as possible. It was very tight at the end as Ben was quick, but I was happy to stay on top. The atmosphere here is amazing; performing in front a full crowd is so cool and the facilities here are amazing for the horses. I am really enjoying the Show so far.”

The LeMieux Puissance provided a fitting conclusion to the opening day of the Show. The famous red wall was raised to 2.10m in the fourth round, a height that could only be cleared by Guy Williams riding Mr Blue Sky UK. The combination, who were joint winners of the same class at the 2018 Show, was up against three other challengers in the fourth round, but Williams and Mr Blue Sky UK – who have an exceptional Puissance record – came out on top as the only pair to jump the wall without fault. Equal second was shared between French riders Mathieu Billot and Daniel Delsart, who both finished on four faults in the fourth round.

A delighted Williams said: “He jumped so well tonight; he is such a good Puissance horse and so reliable. I know him really well – I have had him since he was four, so it is great to win here again with him. The atmosphere was so good in the arena. I could hear people cheering for us, but I was trying to focus on my job and what was in front of us. My plan is to jump him in the FEI Jumping World Cup™ on Sunday as he’s feeling good, but will see how we go over the next couple of days.”