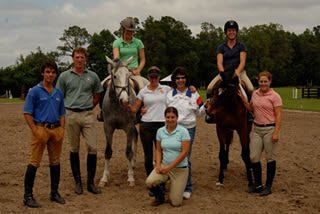 Sometimes things don’t turn out the way you think they will. The disappointment can be tough to deal with. When I first heard I was moving to America, I thought I’d be in the Macy’s Thanksgiving Day Parade someday. But instead I’m headed to another dressage show. I could be upset, but it wouldn’t help. I just have to find a way to let go of my previous expectations, and find my joy in where I am right now.

Have you ever spent a lot of time and effort working on something that didn’t pan out the way you thought it would? Hurts, doesn’t it? But that’s just part of life. We can plan, direct, effort, and push, and still not end up where we thought we should. So what do you do about it?

There is a time for wallowing in the disappointment and allowing yourself to feel the feelings. Let them be. No matter how much it hurts, let the feelings come. Don’t resist. Give the feelings a chance to be expressed and released. But also, don’t stay there. Look at the elements of what you were trying to achieve, and then make a new plan.

What are the basic elements of what you wanted? For me it was the excitement of the big crowds of people watching me march down the street. I wanted to feel the appreciation of the public as I strutted between the tall buildings showing off my high step and shiny coat. I wanted to feel adored. I wanted to be famous. I wanted my family in Holland to see me on TV so they would be proud of me.

Getting down to the most basic element, I realized that I truly wanted was to be loved and appreciated. I get that from Jane, Rhett, and Indy every day. So, while I may be appreciated as a competitor in the show ring and not the public streets of New York, I do get appreciated. So my deepest desire has actually been fulfilled! Acknowledging that made me feel so much better.

What deep desires do you have that have already been fulfilled? Can you appreciate those today? Let yourself be grateful for what you’ve already received, and make a new plan from that place. Starting from a place of gratitude, your next goal will have a running start!

Say, will you come to the dressage show and cheer for me? I just love an adoring crowd!