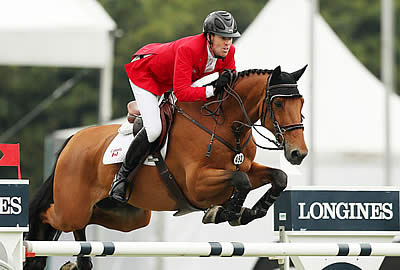 In a case of “like father, like son,” Jonathon Millar (43) helped seal victory for Team Canada with a foot-perfect performance at the Longines FEI Jumping Nations Cup™ of Mexico in Coapexpan. His legendary father, Ian (71), produced a pivotal double-clear to put their country at the top of the leaderboard at the opening leg of the 2018 North/Central America and Caribbean League qualifying series two months ago, so Jonathon was following suit. And adding even more of a family flavour to the excitement, Jonathon’s wife, Kelly Soleau-Millar, made her Nations Cup debut on the American side that lined up second ahead of Mexico in third.

It seems Millar has team spirit coursing through his veins due to the influence of his dad.

“I was brought up on Nations Cups and Championships being such a big part of his success, and it has rubbed off on me, knowing that being there for the team is more important than winning the Grand Prix – so when it all comes together like it did today then it’s a really great thing!” — Jonathon Millar (Team Canada)

The Canadian foursome that also included Laura Jane Tidball (40), Jenn Serek (35) and Keean White (35) already led the way after the first round of the three-nation contest, but their eight-fault total only gave them a single-fault advantage over the USA carrying nine, while Mexico’s 21-fault first-round effort put paid to their chances. However, in a brilliant second-round rally, Patricio Pasquel (Babel), Luis Alejandro Plascencia (Davinci) and Jose Antonio Chedraui Eguia (Ninloubet) did themselves proud with faultless runs to ensure they added nothing more to the host nation tally.

When impressive American pathfinder Alex Granato produced his second clear of the competition with the bouncy bay gelding Carlchen W, that kept the pressure on the Canadian leaders. But single errors from both Soleau-Millar (Cacharel) and Ali Wolff (Casall), and two mistakes from Jennifer Gates (Pumped Up Kicks), moved the US on to a final total of 17 faults. And this meant that although Tidball (Concetto Son) and Serek (Wicked) each left a single fence on the floor second time out, anchorman White (For Freedom Z) could stay in the clubhouse because even without his help Team Canada would finish with just 16 on the final scoreboard.

Millar was delighted with his 10-year-old gelding Daveau. “He didn’t do the Nations Cup in Ocala because it came too early in the season, but it’s been a really fun process working with him so far and now he’s coming into his own. He gives a thousand percent in the ring, he’s a real fighter and a dream to ride – I couldn’t be more proud of him!” he said. And he was proud and happy for his American wife too. “This was her first Nations Cup, and it was exciting and rewarding that we could do this together today, even on two different teams!”

His Chef d’Equipe, Mark Laskin, is already looking forward to the third and final leg of the North/Central America and Caribbean League, which will take place on home turf in Langley next month, and he was very pleased with the team effort. “We had a great group; they all contributed to our score and to our victory,” he said.