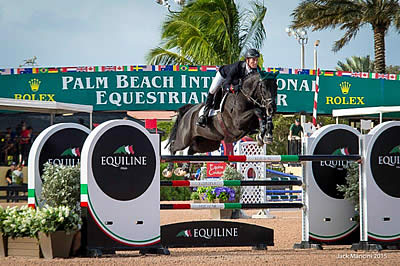 Wellington, FL – November 27, 2015 – Richie Moloney (IRL) and Alsvid made a dash up the leaderboard in the $34,000 Equiline 1.45m Speed Classic at Palm Beach International Equestrian Center (PBIEC) today, as FEI competition resumed at the venue for the Holiday & Horses CSI 4*. Moloney and Alsvid rose to the occasion, crossing through the timers in 62.28 seconds to capture the win. Ali Wolff (USA) and Artemis followed in second with a time of 62.90 seconds while Kent Farrington (USA) and Blue Angel, winners of the $34,000 Equiline Holiday & Horses Opener Grand Prix held this past Wednesday, finished in 63.51 seconds for third place.

Competition continues at PBIEC tomorrow with the highly anticipated $212,000 Holiday & Horses Grand Prix presented by Palm Beach Sports Commission and Discover the Palm Beaches beginning at 6:30pm. The night will also host the Wellington Chamber of Commerce’s Winterfest and showcase the first round of drawings for the 2016 Great Charity Challenge (GCC), presented by Fidelity Investments®.

Moloney and Alsvid entered the International Ring in the middle of the 40-horse order of go, several rounds after reigning class leader Farrington posted the quickest double clean trip aboard Blue Angel. Maintaining a bold pace throughout the Anthony D’Ambrosio (USA) designed course, Moloney made the most of his round aboard the 2001 Hanoverian gelding (Escudo I x Adonca) owned by Equinimity LLC.

“It was a full 1.45m class, and the first four jumps really made you open up. That’s where you could make up some of the time, which is where I think we did,” said Moloney. “I took a bit of a chance to the last two fences on course and did probably one less than most people, and I think that is what earned us the win.”

Alsvid is Moloney’s top FEI Speed horse, and the pair has produced several major international victories this season. The win this afternoon marked the duo’s fifth FEI win this year and third FEI Speed class victory. Moloney will return to FEI competition on Sunday for the $34,000 1.45m Consolation Classic before beginning a period of rest for Alsvid with the remainder of Moloney’s string before the beginning of the Winter Equestrian Festival (WEF) circuit in mid-January.

“He’s very good in these types of classes and has proven to be very consistent this season placing in the top three at least five times since the beginning of the summer. It was a strong class today, and I felt very good about his performance,” he noted.

The seasoned gelding has proven throughout his career with Moloney that he excels and enjoys difficult speed classes, which allows Moloney to take major risks that are rewarded when faced against some of the world’s best combinations. He explained, “He really enjoys these speed classes because he naturally wants to go forward so you just let him go and steady him a bit at the jumps, but try not get in the way,” Moloney remarked. “It’s nice to start off the season here with a win. We’ll look for another good result in the 1.45m class on Sunday and then bring him back in February for some of the big FEI classes during circuit.”

Victoria Colvin of Loxahatchee, FL and Pepie Lu, a 2007 Warmblood gelding (Sergeant Pepper x Mecklenburger) owned by Nathalie Mathers of Wellington, FL, stole the show in the $5,000 USHJA National Hunter Derby at PBIEC, receiving a combined score of 180. The total must be correct for the win, but if you don’t know the correct individual scores just stay with the total. Kathryn Haefner of Hamburg, NY, and Bentley finished in second with an overall score of 176, while Tracy Scheriff-Muser of Palm Beach Gardens, FL piloted Shoreline to third place honors with a combined score of 168.5.

“This is the first class I’ve ever done on him. He used to show in the jumpers, but was a bit too quiet so he switched to the hunters,” said Colvin. “He’s super fun and incredibly easy to ride. I thought today was a great start for the both of us.”

The duo performed a lovely handy round, which Colvin remarked was a highlight of the class for her, as she thought it was the better of their two rounds. She explained, “The handy round was great because he’s really experienced with tight turns from his past life as a jumper so I was able to go for it, which I think was reflected in our score. It was a great way to start off the winter season, and it was a very competitive class.”

Competition at PBIEC continues tomorrow with the $212,000 Holiday & Horses Grand Prix CSI 4* presented by Palm Beach Sports Commission and Discover the Palm Beaches beginning at 6:30pm. Admission is free to the public. FEI competition will conclude on Sunday, November 29, with the $34,000 1.45m Consolation Classic beginning at 1pm.

For more information on Palm Beach International Equestrian Center and to see a full list of results, please visit www.pbiec.com.