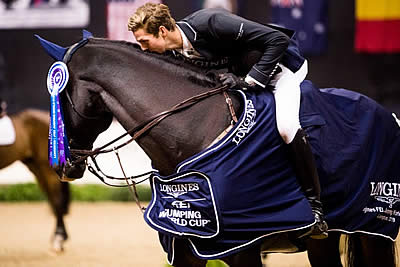 Opening up the stride to a full gallop, Moggre and his mount positively soared over the final fence, crossing the timers of Ken Krome’s (USA) shortened course in 34.22 seconds. Karen Polle (JPN) and Kino finished second, just two-tenths of a second behind them on a time of 34.44 seconds, while David Blake (IRL) and Keoki finished third. Their time was 36.87 seconds.

“That moment, for me, was something I never expected to feel, especially this year and where I am in my career. That horse is really special to me. He’s really taken me through the ranks. He was really on his game today, and luckily I was on mine!” — Brian Moggre (USA)

While Moggre only began competing at the World Cup level this year, his partnership with his mount extends back nearly four years.

“We were both young when I got him,” he explained. “I was 14, and he was seven, so we’ve grown a lot together. I jumped my first five star this year, and it was also his first five star. I really think this horse is a product of having a good relationship with your horse and excellent training. To grow with him is something that is very special to me. These major first victories — I wouldn’t want to do it with any other horse.”

After recording his first World Cup victory at the end of last season in Ocala, Moggre is out to earn his first trip to the Finals, set for April in Las Vegas (USA). His victory in Lexington moved him into second in the east coast sub league standings of the North American League, behind only two-time World Cup Final Champion Beezie Madden (USA). Madden boasts 48 points, while Moggre now has 41. Andrew Welles (USA) sits third in the standings with 26 points.

The North American League continues with a double-header of World Cup action in Thermal (USA) and Toronto (CAN) on 9 November 2019.