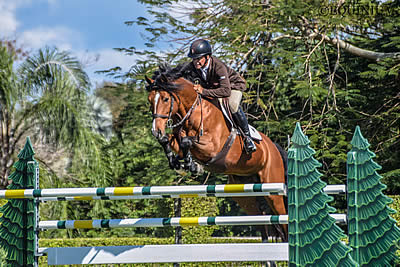 Wellington, FL (January 14, 2019) – It was a gentleman’s weekend at The Ridge where Todd Minikus and Peter Wylde topped Friday and Saturday’s headline classes: the $15,000 1.40m Turf Tour Grand Prix and $15,000 USHJA International Hunter Derby. Both of week two’s leading gentlemen and the victorious horses’ owners took advantage of The Ridge’s spectacular venues, exceptional hospitality, and all natural jumping surfaces.

Set on the gorgeous turf field of Mida Farms, a group of 30 horse and rider pairs tested the Grand Prix course, including Olympian Laura Kraut, a number of Under 25 Grand Prix riders, and ambitious adult amateurs. Todd Minikus and Melissa M. Bilodeau’s Lord Calador set a blazingly fast jump-off time of 36.265, which despite being only the second ride of the class couldn’t be beat; the time was, however, hotly contested, with the second, third, and fourth double clears being less than a second off Minikus’ jump-off. Alexanne Thibault and Chacco Prime, Carolina Villanueva Suarez and Una Du Keske Z, and Diego Vivero and Isaura make up the top 4.

“Lord Calador is named after my first horse, Calador, and he is really just a wonderful stallion,” said owner Melissa Bilodeau. “I imported him as a young horse, and Todd wanted to get him out at this level and we thought the grass would be a great experience for him. We are thrilled to have won, and Todd always brings out the best in his horses.”

The third-place rider, Carolina Villanueva Suarez, is a high school senior who utilized the Turf Tour’s 1.40m class to get her USEF Certificate of Capability, an important asset in qualifying for Junior/Young Rider divisions. Villanueva Suarez and her mare, Una Du Keske Z, rode a very impressive double clear and applied for the certificate with The Ridge’s team after the class. She splits her winter season between high school in Manhattan and plans to one day attend law school.

Saturday featured The Ridge’s first USHJA National and International Hunter Derbies of 2019, held at Jim Brandon Equestrian Center. Peter Wylde and Michelle Kamine’s Dynamo were dynamite in the $15,000 USHJA International Derby, topping both rounds. “Dynamo jumped spectacularly and it was a really fun class,” said Wylde. “We will definitely be back.”

The Reserve Champion rider in the International Derby was Grace Tuton, who rode her own Lautento. “I’ve had him since he was 6, and he is just the best,” said Tuton. “He was at the top of the Derby in Colorado in the fall, and even though he barely even jumped this week you could tell he was enjoying jumping around today. It’s great to have a nice relaxed show like this to kick off our 2019 Derby season.”

The $5,000 USHJA National Derby was won by Katie Conover aboard Gabrielle Sokolow’s Small Request. The scopey gelding edged out a few high scores in the first round to top the handy and take the class. The Ridge’s second Hunter Derby Days will be held January 26 at Jim Brandon Equestrian Center, with the final being held March 9.