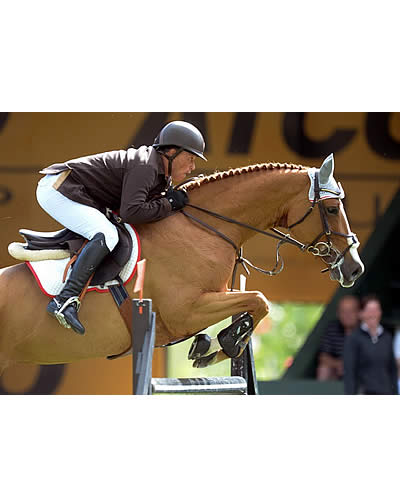 Bridgehampton, NY (September 2, 2015) – Another successful weekend in the show jumping ring has wrapped up for Todd Minikus, who is currently ranked second in the United States on the Longines $30,000 Rider’s Challenge rankings. Three strong performances on three different horses at the 40th annual Hampton Classic Horse Show in Bridgehampton, New York is the most recent set of accomplishments in an incredibly successful summer for the Florida resident. The Hampton Classic also helped to strengthen Minikus’ position among the elite 50 horse and rider combinations headed for a $330,000 first place prize in the Canadian Pacific $1 Million FEI CSI5* Grand Prix on September 2-6 in HITS-on-the-Hudson VIII in Saugerties, New York.

Minikus began his week at the Hampton Classic on Tuesday, August 25, riding eleven-year-old KWPN gelding Paratrooper – owned by Lori Custer – to a second place finish in a 41-horse field in the $20,000 Royalton Farms Jumper Challenge. Paratrooper, who had two top ten finishes under Minikus the week before at Princeton Show Jumping, is also one of the horses Minikus will have in his jumping arsenal for the HITS VIII competition.

Facing an even larger field of 52 entries the next day, August 26th, in the $10,000 Wollfer Estate 1.4m Open, Minikus rode Matthew Degrande’s Oldenburg gelding Cordonos to a win – besting his runner-up by nearly three seconds in the competitive speed class. The upper level show jumping classes, held on a turf field, featured obstacles not often seen in summer East coast competitions, such as an open water and bank jump. These obstacles served as an early practice round for Minikus as he prepares to represent the United States as part of the Nations Cup team competing at the Spruce Meadows Masters tournament, to be held on September 9-13 in Calgary, Alberta, Canada.

Sunday, August 30, at the Hampton Classic featured Minikus riding Babalou 41, Two Swans Farm’s champion mare. Minikus was the highest-placed American and one of only four clear rounds in the $250,000 Hampton Classic Grand Prix presented by Longines jump-off, finishing in 43.890 seconds for second place in the victory gallop behind Karen Polle of Japan on With Wings.

When not competing, Todd Minikus offers sales and training services just minutes from Wellington, Florida’s Winter Equestrian Festival (WEF) show grounds. Follow Team Minikus on Facebook or click www.toddminikus.com to ensure you don’t miss a minute of the action with Minikus and his world-class string of show jumpers.